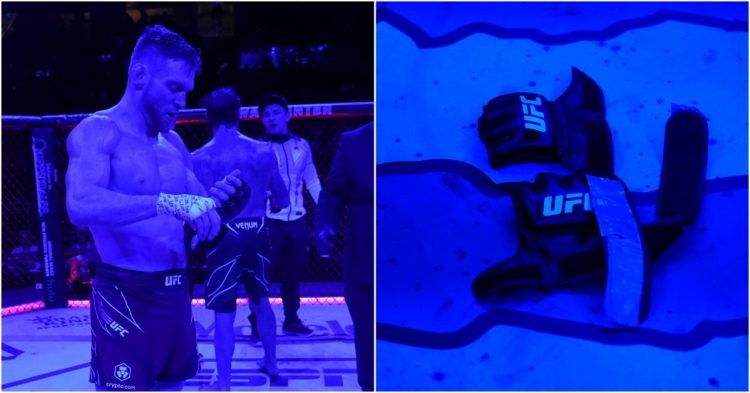 Scott Holtzman leaves his gloves in the Octagon. (Credit: UFC)

Scott Holtzman fought Clay Guida in the preliminary card of UFC Orlando. The 39-year-old was coming off two losses against top contenders, Beneil Dariush and Mateusz Gamrot. Hence, the bout against Guida was going to be a big test for Holtzman. Although Holtzman and Guida had a great 3-round fight, the judges scored the bout for Guida.

But, it was a split decision as the two judges scored the bout 28-29 for “The Carpenter”, and one judge had it 29-28 for Scott Holtzman. While Guida landed 66 significant strikes, Scott managed to land 65. In total, Clay Guida landed 95 strikes and Holtzman landed only 77. Clay’s case was made stronger with the 4 takedowns he managed to secure as well.

Nicknamed “Hot Sauce,” Scott Holtzman announced his retirement following the close loss. But the post-fight ceremony did not make it to the broadcast as UFC cut to a commercial instead of taking Holtzman’s interview. Instead, the company only posted pictures of Holtzman leaving the gloves inside the Octagon and congratulated him on having a good career.

Fans felt that the company showed incredible disrespect towards Scott Holtzman. While it is true that UFC does not interview every single fighter from the prelims, they could have called an audible and interviewed Scott to give him a proper send-off. It angered the fans who shared their unhappiness with the situation on Twitter. They also asked for more fighter interviews, instead of sponsored commercials.

What’s the rush?? give the guy some mic time!!

get better time management so we could have seen it maybe

Pretty poor that he couldn’t be given even 2 minutes on the mic to say something.

UFC needs to allow Marshall and @HotSauceHoltzy to say some words on there social media. Do better for the fighters and fans. Lame Dana!

UFC had a similar controversy at UFC 271 when the company did not show Roxanne Modafferi’s walk-out during the broadcast of the preliminary event. It also struck the wrong cord with the fans, as it was Roxanne’s last fight of her career.

Scott Holtzman joined the UFC in 2014 and had a record of 7-0. He won the XFC lightweight belt before coming into the UFC. However, he did not have the same level of success in the UFC as he has a record of 7-6 in the company. He finishes his career with an MMA record of 14-6.