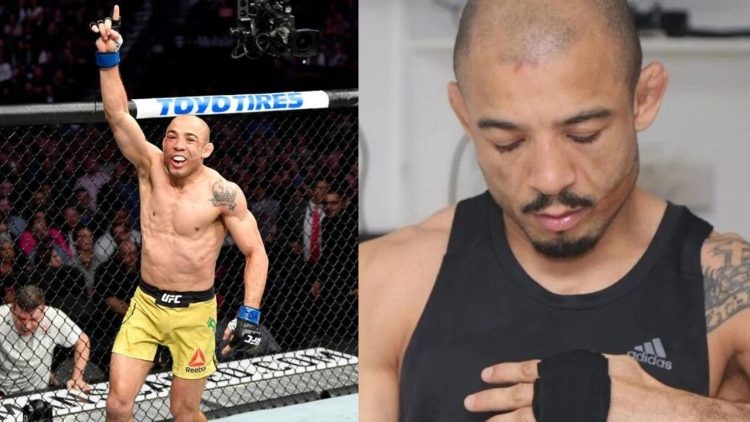 Today, the world of fighting mourns the retirement of a legend. Jose Aldo(31-8), after an illustrious 18 long years, has decided to call time on his MMA career. Recent reports from media outlets have confirmed the news with the Brazilian also removed from the UFC’s 135 lbs rankings.

Jose made the switch to 135 with some good success. He also put together three back-to-back wins over contenders like Marlon Vera, Pedro Munhoz, and Rob Font. After a decent run at bantamweight, Aldo lost to Merab Dvalishvili at UFC 278.


Following the loss, Jose’s head coach Andre Pederneiras spoke about what he would like to see the fighter do. He expressed the desire to see The King of Rio retire. “I would tell him to quit,” he said. “I think Aldo has already conquered so much. It’s not going to be that last fight that is going to take away the legacy he has built in the sport. My biggest fear is when an athlete arrives at this final stage of their career and an injury might mess them up for the rest of their life.”

As such, Aldo will not be completing his contract with one fight still left. Originally, many had anticipated that Aldo would fight his last at UFC 283 in Rio. Even Dominic Cruz, a fellow veteran was touted as Aldo’s opponent for the fight.

This is still the #1 greatest home country moment in UFC history: pic.twitter.com/wwjhA4i2GM

Can’t believe Jose Aldo is retired now. I remember watching him fight in the WEC and in the UFC for over a decade. He had an absolutely amazing career! He should 100% be inducted into the UFC Hall of Fame next. One of the greatest fighters of all time. Thanks for all the memories

Jose Aldo was hugged in a snoozefest as his last fight and now he’s gone pic.twitter.com/gNGUkDCHap

The greatest featherweight this sport has ever seen.

The term legend is often used too loosely in this sport.

This man epitomises it & more. His body of work & title reign speaks for itself.

A true icon and role model who will sorely be missed.

If it's true that he retired.@josealdojunior you're one of my favorite fighters and an absolute legend. Enjoy retirement, thank you for all the memorable moments 🙏

Happy retirement to Jose Aldo one my favorite fighters growing up 🙏🙏🙏

Don’t know if this is it, but If so was a pleasure meeting and training with @josealdojunior 2015 on tuf – absolute legend @fightpicsgohard 💯 pic.twitter.com/6iDrsTOTP3

The greatest MMA fighter I’ve ever seen retired from the sport today.. Good luck Jose Aldo we will miss you pic.twitter.com/OxgQqNzFxM

Sporting a professional record of 31-8, Aldo, a former WEC featherweight champion, most recently featured on the main card of UFC 278 back in August.  Unfortunately, he ended up suffering a unanimous decision loss to fellow bantamweight contender, Merab Dvalishvili, in a pivotal matchup.

As such, fans can look back at his incredible career and rest assured that Aldo has cemented his place as one of the best of all time in the sport.