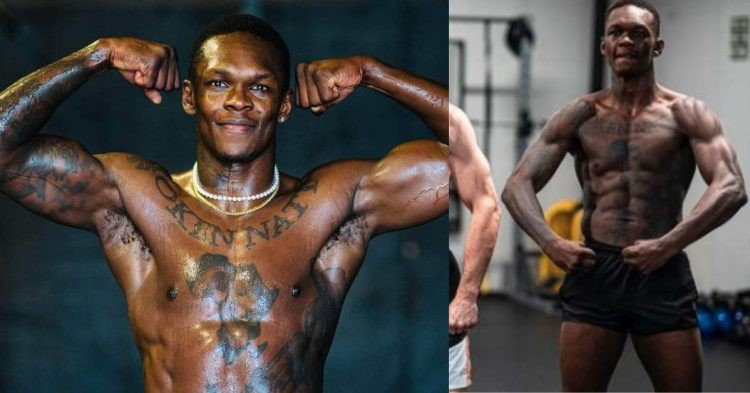 Israel Adesanya gets trolled with 'gyno' jokes ahead of UFC 281 (Credit: Instagram)

UFC Middleweight Champion Israel Adesanya has been accused again of using steroids ahead of his main event fight at UFC 281. Adesanya will hope to exact revenge on his long-time rival from his kickboxing days, Alex Pereira, at the Madison Square Garden next weekend.

Adesanya has denied the steroid allegations in the past, but he is getting trolled again after his recent pictures surfaced. In a recent post on Instagram, Adesanya can be seen posing with fellow teammates, Dan Hooker and Carlos Ulberg.

Some fans pointed out that the ‘gyno’ is back on Adesanya’s right pectoral muscle. Adesanya is getting ruthlessly trolled with ‘gyno’ jokes like “Gynosanya is back”, “Tittysanya is back”, “Gynobender is back”, and more. Another user left a comment: “The picture is strong really. But what’s that on Izzy’s chest?”

The USADA gave the middleweight champ clearances multiple times. So it is very unlikely that Adesanya is on steroids. The swollen pectoral muscle could’ve been a case of gynecomastia.

Adesanya addressed the allegations back in 2020 and claimed that all of his tests are normal and the lump on his chest might have been because of unhealthy living and “smoking too much weed”.

Is Israel Adesanya on steroids ahead of UFC 281?

Israel Adesanya was accused of using steroids for the first time at UFC 253 when he fought Paulo Costa. Some fans noticed a small lump on the right pectoral region of Adesanya. However, Adesanya has never tested positive for PEDs and was recently awarded the fifty clean tests USADA jacket.

As Pereira has beaten Adesanya twice, some fans might suggest that the middleweight kingpin is leaving no stone unturned and even has resorted to using performance-enhancing drugs. However, it is very unlikely that Adesanya would tarnish his reputation with such acts. Adesanya is undefeated in the middleweight division and is considered one of the best strikers in the world.

‘The Last Stylebender’ has passed 50-drug tests from USADA and claimed that he is all-natural. In an interview, Adesanya claimed that he never used any steroids and that the dominant performances inside the octagon are all because of his elite skill set.