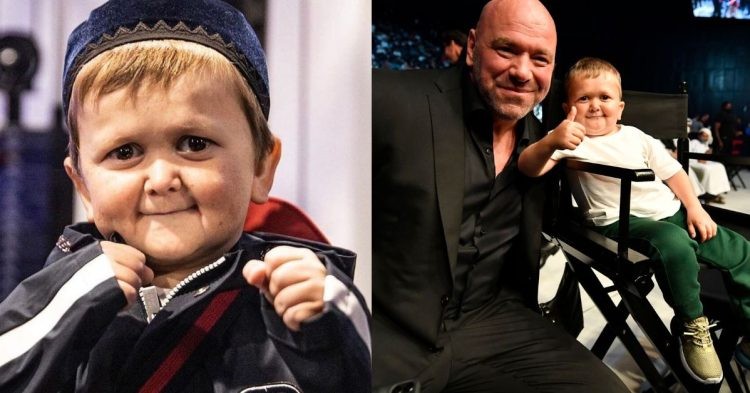 Hasbulla Magomedov has recently signed a 5-year contract with the UFC. According to sources, ‘Mini Khabib’ will serve as an ambassador for the UFC, doing media and attending various events for the organization.

Despite looking like a five-year-old, Hasbulla is actually a 20-year-old blogger and social media star from Makhachkala, Dagestan. His initial rise to fame was through posting funny videos on TikTok during the pandemic.

Previously, Hasbulla attended UFC 267 event in Abu Dhabi to support Islam Makhachev in his fight against Dan Hooker. Hasbulla turned out to be a good luck charm for Makhachev as he had a successful outing against Hooker, submitting him within a minute. After the victory,  the young Russian even joined Makhachev and his team for celebrations.

Other than that, Hasbulla is also seen with the likes of Alexander Volkanovski and Daniel Cormier. Thus, it appears that ‘Mini Khabib’ is fitting in well at the UFC.  He will also be present for UFC 280 in Abu Dhabi cornering Islam Makhachev for his fight against Charles Oliveira.

How old is Hasbulla? Age, Height, and Weight

Born on 9 March 2002, the young Russian is currently 20 years old. However, this information is not confirmed and is reported differently by different sources.

Hasbulla is 3 feet and 4 inches according to sources, meaning he measures just over 100cm. Due to medical conditions, people in this category usually have a height of 4 feet 10 inches (147cm) or less, while the average height among such adults is 4 feet (122cm).

Due to the same medical condition, Hasbulla also weighs significantly less than an average person. As such, he comes in at around 40lbs which translates to roughly 20 kilograms.

What disease does Hasbulla suffer from?

According to medical experts, Hasbulla – and his arch-enemy Abdu Rozik – suffer from Growth Hormone deficiency (or dwarfism). It is a genetic disorder that occurs due to the brain’s pituitary gland’s inability (responsible for producing most hormones) to produce Growth Hormone (GH).

Experts believe that in some cases this condition is caused by tumors, but there aren’t any valid explanations as to why some people with Growth Hormone deficiency have the disorder.

However, if Growth Hormone deficiency is diagnosed in childhood, it can be successfully treated with Human Growth Hormone (HGH) injections which can spur development during puberty.

Another key example of this situation is Lionel Messi, who although didn’t suffer from dwarfism, was diagnosed with Growth Hormone deficiency aged 10. Eventually, Messi had his HGH treatment paid for by Barcelona when he joined the club’s academy a few years later.