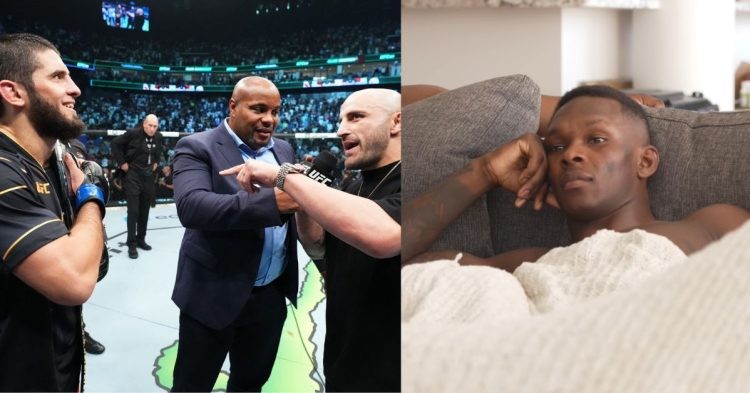 UFC middleweight champion Israel Adesanya believes Islam Makhachev is not ready for Alexander Volkanovski. After winning the lightweight title, Makhchev called out ‘The Great’ and took a dig at Volkanovski for his short stature.

However, Adesanya thinks that will be a mistake for the Russian if he underestimates Volkanovski. Makhachev was calling Volkanovski “the short guy” and might be sidelining his skillets. Makhachev said: “I didn’t see the short guy, bring him in here.”

Volkanovski is the P4P No.1 in the UFC and was the backup fighter for the main event of UFC 280, in case any of the contenders pulled out. After beating Charles Oliveira, Makhachev and his mentor, Khabib Nurmagomedov stated that they will now target the P4P No. 1 spot and then called out the featherweight champion.

‘The Great’ also accepted the fight and is now preparing for his lightweight debut. Adesanya and Volkanovski train together at City Kickboxing, which means Israel knows that Volkanovski should not be underestimated.

The featherweight champion showed his elite skills in the octagon and dominated the division. Now after almost clearing out the division, Volkanovski is eyeing the lightweight title. After the event, UFC President Dana White also confirmed that Makhachev will fight Volkanovski for his first title defense.

Islam Makhachev has fulfilled his destiny after beating Charles Oliveira in the main event of UFC 280. The Russian answered a lot of questions and proved that he is one of the best lightweights in the UFC.

With his grappling, he looked almost like his mentor, Khabib Nurmagomedov but he looked phenomenal on his feet as well. Makhachev rocked Oliveira and dropped him with sharp counters then dominated the Brazilian before submitting Oliveira with an arm triangle.

Adesanya was also watching the main event and posted his reactions on his YouTube channel. When Makhachev trapped Oliveira with the arm triangle, Adesanya can be heard saying:

Just as he was saying this, Oliveira tapped out and Makhachev became the new lightweight champion. This was one of the most anticipated matchups and a fight that seemed too good to be real.

Both of the fighters had their moments in the fight however, Makhachev seemed to be dominating the fight. It was very surprising for some fans, as Oliveira who seemed to be the better striker was beaten in striking and later got submitted. With this win, Makhachev has stopped Oliveira’s incredible winning run but surely he will come back stronger.