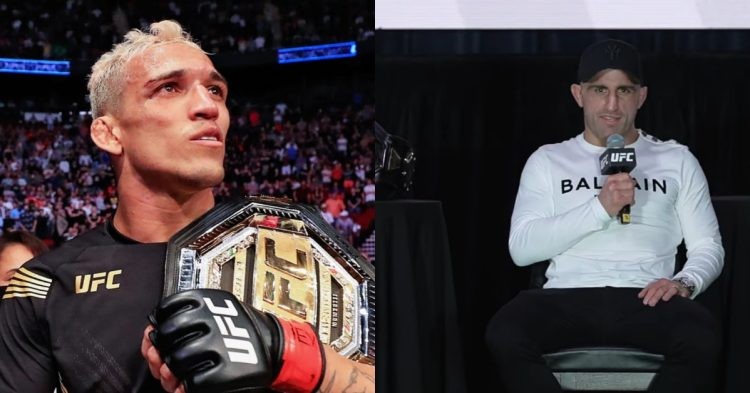 UFC Featherweight Champion Alexander Volkanovski wants to fight Charles Oliveira for the vacant lightweight title. Alex is set to return to the Octagon on July 2nd at UFC 276. He will fight Max Holloway for the third time in the co-main event of the card. While his teammate Israel Adesanya will headline the card alongside Jared Cannonier.

Ever since he made his UFC debut, Alexander Volkanovski is yet to take on an easy challenge. Before dethroning Max Holloway, Alex destroyed Chad Mendes and Jose Aldo. After winning the belt, he has schooled the likes of Brian Ortega and The Korean Zombie. Despite being so dominant against most of the contenders, he has always had a hard time against Holloway.

Although he has won both of his bouts against the Hawaiian fighter, the method of Volk’s victories left a lot to be desired. Hence the 3rd bout becomes very important to settle the rivalry once and for all. But the question then becomes, what is next for the champ if he beat Holloway for the third time? In a press conference from his home country Australia, Volkanovski stated that he is eyeing Charles Oliveira.

Alexander Volkanovski breaks down a bout against Charles Oliveira

If the result goes his way at the upcoming UFC Pay Per View (PPV), then it will complete the fourth title defence in a row at 145lbs for Alex. Although there are upcoming contenders like Josh Emmett and Yair Rodriguez, Volkanovski wants the status of being a double champion after UFC 276. During his conversation with the press, the 33-year-old said.

“Dana has even touched on it, after this one (fight against Holloway), I’m gonna go do my thing, it’s gonna give me that time to go (for the Charles Oliveira fight). At least have the chance to go for the double champ status. I’m gonna do what I plan on doing, then that’s what I’m gonna call for.”

As the champ mentioned, Dana White has already confirmed that Alexander Volkanovski will certainly be rewarded with a title shot at the 155lbs division if he wins against Holloway. Hence, the is no doubt that the Aussie will be a candidate to face Oliveira in near future.

But the task of actually defeating Charles Oliveira will certainly be an enormously difficult one. Elite lightweight fighters like Dustin Poirier, Michael Chandler, Tony Ferguson and Justin Gaethje have already failed. On top of that, Alex will have a big disadvantage in terms of size as well.

However, Volkanovski is not bothered by any external factors. Although he praised Charles for being a dangerous opponent and being an exciting fighter to watch, Alex thinks he can take advantage of the fact that Oliveira does not exactly have the best chin in the division. Volk said,

The featherweight champion, moving up to challenge for the lightweight belt, will certainly be huge. Charles Oliveira has already proven that he is certainly a draw. Hence the bout between him and Volk will be a big PPV seller for sure.

The last time when this scenario played out was at UFC 205, which saw (then-champion) Conor McGregor challenging Eddie Alvarez for the 155lbs belt in 2016. It sold over a million PPVs.