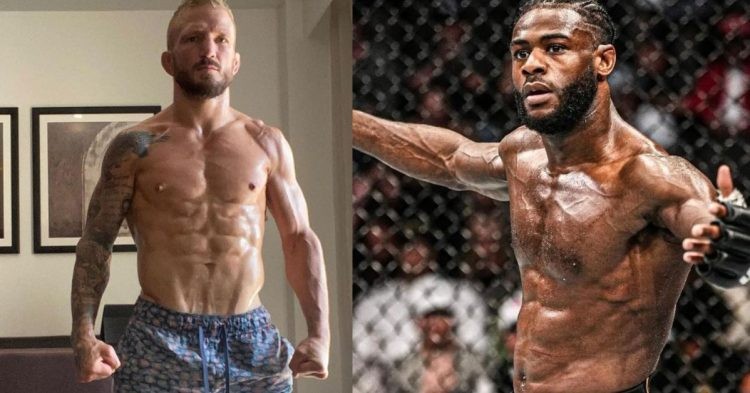 TJ Dillashaw will challenge Aljamain Sterling for the bantamweight title at UFC 280 taking place in Abu Dhabi this Saturday.

Ahead of the fight, Sterling has been actively trolling his opponent for some past mistakes he made. On various occasions, Sterling has made harsh comments on Dillashaw’s embarrassing past where he was caught using performance-enhancing drugs that eventually got him a two-year suspension.

Sterling had previously said “I’m fighting the guy I have watched for so many years… I respect everything the guy has done, but I know he’s been cheating his entire UFC career. It’s been disclosed by his own teammates. It’s not me blowing smoke. His own teammates outed him.”

Now in the recently concluded UFC 280 press conference, Dillashaw bitterly responded to Sterling’s allegations. Dillashaw pulled out a witty one-liner and said “He’s [Sterling] so worried about it, he’s so worried about it, he can come test me himself, he can test these nu*s in his mouth”. He got huge applause from the crowd for his waggish statement.

T.J. Dillashaw has a golden opportunity to become a three-time UFC bantamweight champion if he is able to defeat Aljamain Sterling who is riding high on confidence after a highly impressive victory against former champ Petr Yan. Dillashaw on the other hand hasn’t been very active inside the octagon lately. After serving a two-year suspension, Dillashaw returned to fight top bantamweight contender Cory Sandhagen and sneaked a slick split decision victory that has now earned him a title shot.

Stylistically it’s a tough matchup for Dillashaw, as Sterling’s grappling had proved to be a massive hassle for many elite strikers. Petr Yan was the latest victim of Sterling’s indomitable pressure on the ground.

Fans along with Aljamain Sterling believe TJ Dillashaw is on PEDs

Current bantamweight champ Aljamain Sterling has regularly targeted Dillashaw for his past links with steroids. Worth mentioning that prior to his fight against Henry Cejudo in January 2019, Dillashaw was suspended by the United States Anti-Doping Agency (USADA), after testing positive for a banned performance-enhancing drug (EPO).

After seeing Dillashaw’s such ripped physique, it was about time that we saw him getting flooded with various steroid accusations. Although Dillashaw didn’t seem to be bothered as he claimed to be in the “best shape of his life”.

Fighting Sterling is a tough matchup for Dillashaw stylistically, as Sterling’s grappling had proved to be a massive hassle for many elite strikers. Petr Yan was the latest victim of Sterling’s indomitable pressure on the ground. There is no doubt that Dillashaw will have to bring his absolute A game to the table, as Sterling seems to have a slight advantage over him.