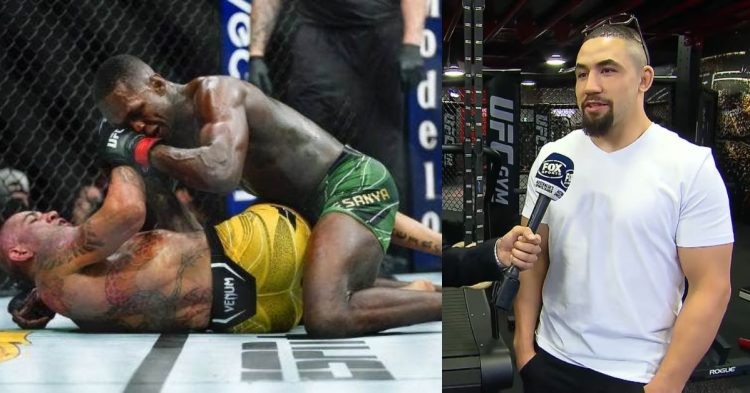 Robert Whittaker talks about how he can beat Alex Pereira (Credit: YouTube)

Robert Whittaker gives his take on how he would fare against the new UFC middleweight champion Alex Pereira. Whittaker previously talked about Pereira’s massive size and even said that Pereira is a better matchup for him than Adesanya.

The Brazilian beat Israel Adesanya in the main event of UFC 281. Pereira won by TKO in the final round of the title fight. However, throughout the fight, Adesanya was beating him in striking and grappling. Whittaker is a much better grappler than Adesanya, which brings to the question if Pereira can defend the title against good grapplers like Whittaker and Costa.

In a recent interview, the Australian talked about how his grappling could be his key to victory against Pereira. He said: “To be fair, I think I could do my usual game against Alex Pereira.

I think stylistically he’s a better matchup for me. He’s definitely much more straight and he doesn’t lean back and fade away as well as Izzy does cause Izzy is a much more defensive striker. So I think technically it’s a much better fight for me.”

According to Whittaker, he won’t have to use his wrestling to beat Pereira. This is because Pereira is not a defensive striker like Adesanya. ‘Poatan’ tends to move forward and use minimal head movements unlike ‘The Last Stylebender’.

e and power could be a problem for Whittaker. But before that, he will have to go through Paulo Costa at UFC 284, which takes place in Perth, Australia. This gives Whittaker the home-turf advantage.

In a potential matchup against Pereira, Robert Whittaker will have a significant disadvantage in terms of size. Ahead of UFC 281, Pereira had to struggle to make weight and when he showed up for the title fight he looked enormous.

After making weight at the ceremonial weigh-in, Pereira gained around 27lbs ahead of the main event fight at UFC 281. ‘Poatan’ weighed 95.9kg (211.4lbs), and he looks like a light heavyweight fighter. This certainly gives him a significant advantage in the middleweight division.

In the same interview, Whittaker also talked about the size and power advantages that the Brazilian had at UFC 281. He added: “They’re two very big guys the both of them. But I think Alex looks big even against Izzy and Izzy’s a big dude. So size and reach and length is definitely a factor you need to consider moving into a fight against them.”

Check out the full interview below:

Whittaker is one of the best strikers, but his advantage over Pereira is his grappling. However, Pereira is a dangerous striker and his massive size gives him a big advantage. Whittaker also mentioned Pereira’s huge size when he was standing next to Adesanya.

Robert Whittaker on Alex Pereira: Did ya see the size of the fella?#UFC284 pic.twitter.com/jWyKHqGF1z

Whittaker was defeated twice by Adesanya. In the first fight, Adesanya knocked him out, and in the second Izzy beat him by a split decision. But now when the title is in Pereira’s hands, this time the results could differ.