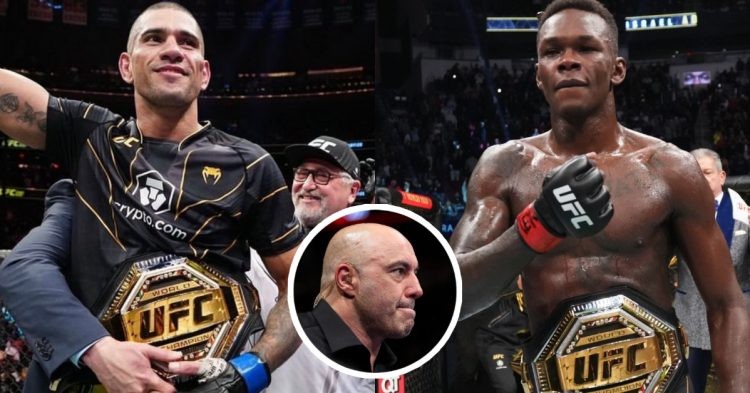 Coming into the UFC 281 fight week, Israel Adesanya repeatedly stated that he wanted to put on a horror show against Alex Pereira. However, it was Pereira who got the stunning KO win and left the Octagon with the middleweight title. Despite such a magnificent win at the recently concluded PPV, UFC commentator Joe Rogan thinks Israel Adesanya is the better striker!

Alex Pereira had two wins over Israel Adesanya in kickboxing before crossing paths with him inside the Octagon. Pereira’s second win was a brutal KO that had Izzy lying on the canvas motionless. But, up until that point, the Kiwi was dominating the bout and even had Poatan badly rocked in the bout. So it was clear to the fans that Adesanya was a more technically gifted striker than Alex.

Joe Rogan pretty much echoed the sentiment in his podcast. During episode 1900 of his “The Joe Rogan Experience” podcast, the 55-year-old recapped UFC 281. Rogan was back in the commentary booth for the fight after missing the previous PPV. He witnessed the bout upfront and saw Alex dethrone Adesanya. But, in his humble opinion, Adesanya was perhaps more well-rounded as a striker.

“There’s people that are better than you at your specialty. And at least on paper Alex Pereira is one of the best kickboxers of all time. I still think Izzy is technically a better striker. Cause Izzy is just so, he’s so clever and sophisticated and he doesn’t have the kind of power that Pereira has. But Pereira is very technically good too. He just has a different thing that he relies on. He just has that nuclear option.”

Rogan spoke about their first kickboxing fight as well and revealed that he was not on the same page with the judges. Before UFC 281, Adesanya also blamed the judges for scoring the first kickboxing bout wrong. Even Pereira himself admitted that the bout was indeed a tough one.

Much like their second kickboxing fight, their bout at UFC 281 also went the same way. Adesanya was perhaps seconds away from knocking out Pereira after the first round itself. At the last possible second of round 1, Izzy landed a big shot which rocked Pereira badly. But, the buzzer went off right after that as the round ended.

But the 35-year-old made a strong comeback as he won round 2 against The Last Stylebender. Although Adesanya controlled rounds 3 and 4, Pereira made a strong push from the beginning of round 5 and landed a big left hook. It rocked Izzy and Alex followed it up with much harder punches. The ref ultimately stopped the bout two minutes into the final round. But who landed more punches in the fight? Let’s find out!

So in total, Alex Pereira landed 91 significant strikes whereas Izzy landed 86. But that does not tell the entire story of the bout as Adesanya was much more efficient with his striking.

Alex loaded up on his punches, but Adesanya danced around the cage and landed the better strikes. If not for the bell, he could have won the bout too. So there is definitely some merit to Joe Rogan’s point and even the most hardcore Pereira fans will agree with it too!