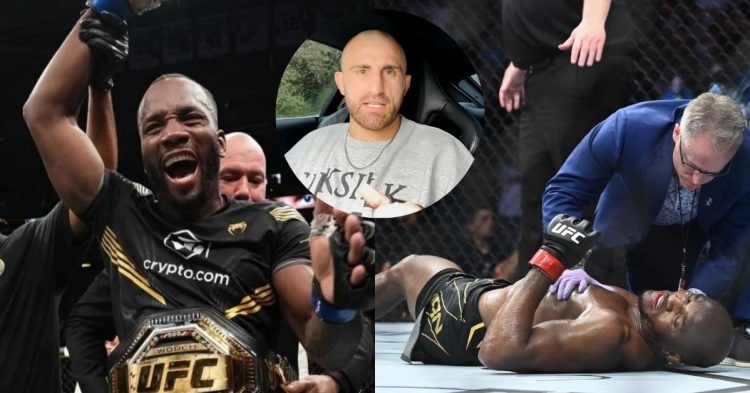 Alexander Volkanovski is now the new Pound-for-Pound king after Kamaru Usman was brutally knocked out by Leon Edwards at UFC 278. As a result, Usman was replaced as the UFC pound-for-pound king and slipped down to the 4th spot in the Men’s rankings.

In a recent video on his YouTube channel, Alexander broke down the technique behind the highlight kick and provided some insights on how to implement the move. He is very happy to see Leon finally getting the belt and respect. In the video he said:

“I was feeling for him and now it’s all paying off and he deserves it. Happy to see him finally get the respect he deserves.”

‘The Nigerian Nightmare’ suffered his first defeat in the UFC and lost his belt and P4P No.1 spot in the process. Edwards shook up the world when he landed a vicious head kick that knocked out Usman in the final round.

Volkanovski seemed to be very impressed by Leon’s performance and his story. He then went on to explain the crazy head kick and the mechanism behind it, which he uses in his fights too. Talking about the knockout he said:

“He had a good start and then things just weren’t going his way.

He got tired maybe from the high altitude whatever it is, not going his way, and then bang minutes ago. What a story man!”

‘The Great’ is unbeaten in the promotion with 12-straight wins. He has defeated the top prospects in the game the likes of Max Holloway, Brian Ortega, and Jose Aldo. The Australian also happens to be the teammate of UFC middleweight kingpin Israel Adesanya, along with Dan Hooker and Kai-Kara France.

The featherweight champion, Alexander Volkanovski sits now at the top of the Men’s P4P list. He is ahead of teammate and UFC middleweight champion Israel Adesanya as well as former UFC lightweight champion Charles Oliveira.

After Usman’s loss, the P4P ranking changed significantly. The former No.1 has dropped three spots down to #4 in the pound-for-pound rankings, with Alexander Volkanovski now at #1, Israel Adesanya at #2, and Charles Oliveira at #3. Here is the full list below:

The Australian star has been the UFC champion since 2019 and 4 title defenses, with his last win coming against Max Holloway at UFC 276. ‘The Great’ has shown his elite skills and toughness inside the octagon and has proven again and again that he is one of the best in the promotion.

As of now, there has been no official statement regarding Alex’s next fight. However, the featherweight champion has desired to move up a weight class and fight for the lightweight title next year in his homeland, Australia.