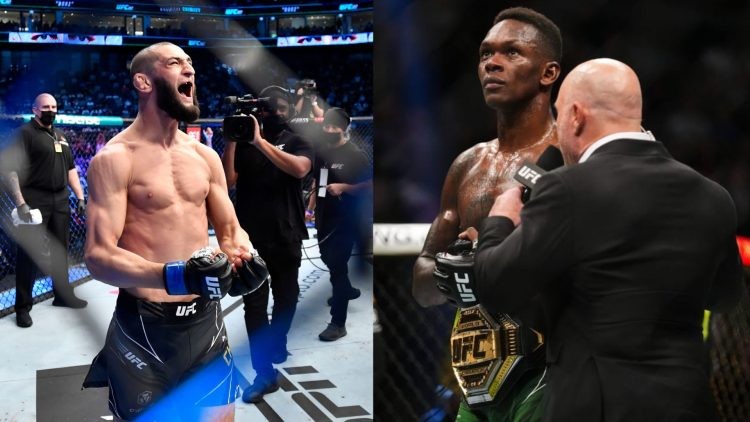 Israel Adesanya has recieved a ton of criticism for his last title defense against Jared Cannonier at UFC 276. Leading upto the fight, The Last Styledender promised the fans that he would dominate Cannonier and finish him. However, it was yet another decision win for the middleweight champion, where Adesanya was able to outstrike Cannonier at range.

Israel Adesanya has displayed great skills in his title run. The rematch against Robert Whittaker was vert technical and fight against Paulo Costa was exciting. However, his fights against Yoel Romero, Marvin Vettori and Jared Cannonier have not helped his star power. In fact, PPV buys for Adesanya’s fights have been decreasing constantly and fans have started calling Adesanya “boring”.

In a recent interview with the MMA Hour, Adesanya’s mpotential future opponent, Khamzat Chimaev talked about his last performance against Cannonier and the fan criticism.

While Khamzat Chimaev does not mind Israel Adesanya deciding to play it safe and secure decision wins he believe that the champion is not hungry anymore.

“He’s doing his job, he makes his money. Now he’s the champ. He doesn’t need to do crazy things to win. I don’t know what’s happening with him. He fights better before. Now maybe he is not that hungry. He’s driving crazy cars, he has a lot of money. It makes some people change you. When you’re hungry you fight crazy like he did before. Now he just makes the points and win fights.”

It’s needless to say that Khamzat Chimaev has his eyes on Israel Adesanya’s middleweight title. At the moment, it seems Chimaev is laser focused on winning the UFC welterweight title.

However, The Borz confirmed that if Kamaru Usman takes a long break after his next title fight against Leon Edwards, he will be open to move up to middleweight and fight a big name.

The middleweight division has an exciting title fight coming up, where Israel Adesanya might face his former rival, Alex Pereira. And if Khamzat Chimaev moves upto middleweight then a fight against Robert Whittaker, who has lost to the champion twice, would make sense.

however, the ideal scenario should be Khamzat Chimaev fighting the winner of Kamaru Usman vs Leon Edwards early next year.