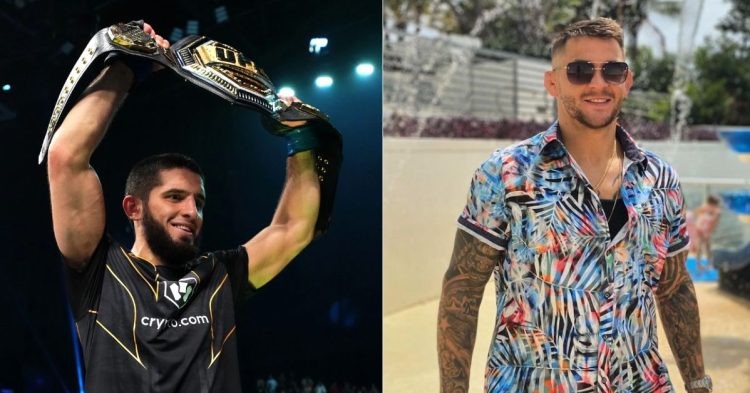 Islam Makhachev is slowly getting the recognition and respect he always truly deserved. The Dagestani fighter shocked the world after he submitted Charles Oliveira at UFC 280 in Abu Dhabi to become the new UFC Lightweight Champion of the world. Sharing his thoughts on the “smooth” victory, former interim lightweight champion Dustin Poirier had nothing but praise for Islam Makhachev.

“Very impressed. He went in there and did it as smooth as you can possibly go in there and do it. No marks, no cuts, no bruises, and he is a world champion. That’s a sweet night man! I am very impressed with him.” Poirier said.

While Makhachev has always been looked at as this grappler who seldom keeps the fight on the feet and likes to take his opponents down and dominate them on the ground, it was a much different outing from the Dagestani fighter at UFC 280.

Makhachev hurt Oliveira with his straight right in the very first minute and looked confident in his ability to strike against Charles Oliveira. He was incredible in the clinch exchange, and hurt Do Bronx with repeated straight punches. It was a right counter that dropped Oliveira, following which Makhachev was able to get on the top and squeeze a victory with an arm-triangle choke.

Dustin Poirier was left impressed with Makhachev’s striking prowess and lauded him as a complete mixed martial artist.

“It’s huge! In this day and age in mixed martial arts, you can’t be a fighter who had one thing. You’ve got to be able to do it all. You have to be a mixed martial artist. And he showed that. He went out there and hurt Charles, and put him away at his own game. That’s the highest level.” Poirier said.

Islam Makhachev will likely take on Alexander Volkanovski next in his first title defense. The featherweight champion will look to become a two-division champion as he takes on the Dagestani fighter in a historic fight, expected to take place at UFC 284 in Perth, Australia.

Meanwhile, Dustin Poirier has a huge task in front of him in the form of Michael Chandler. The dup will share the cage on November 12 inside Madison Square Garden at UFC 281.