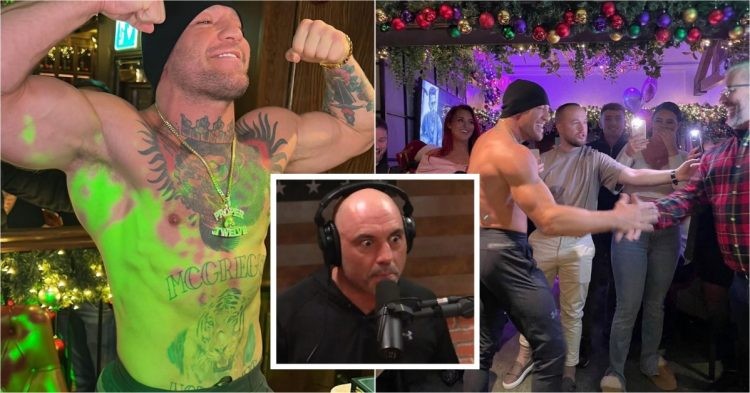 Conor McGregor is currently taking time off from fighting to focus on his movie career. He is filming his debut movie, the “Road House” remake, which is set to release in the near future. McGregor got in serious shape for the movie and it does not look like he is returning to the lightweight any time soon. UFC commentator Joe Rogan recently spoke out about McGregor’s shape and had some interesting comments.

As fans know, The Notorious One is no longer in the USADA testing pool. 2022 is about to be in the rearview mirror and reports suggest that Conor will go the entire year without a drug test. Hence, his insanely muscular physique is coming under question. Recently, even Dustin Poirier hinted that Conor was indeed on steroids during their Twitter beef.

You done filming Roid House and ready to get slapped around again!?

The latest MMA personality to have the same opinion is Joe Rogan. During a recent episode of his “The Joe Rogan Experience” podcast, Joe revealed his true feelings on McGregor’s shape and added, if USADA was to test the 34-year-old, the Dublin native would definitely test positive for illegal substances.

Joe Rogan was also vocal about Liver King recently and slammed him for lying about using PEDs. He also urged Dwayne Johnson to come clean about his physique as Rogan does not believe that The Rock’s shape is purely based on a clean diet and gym work. But McGregor also clapped back at Rogan about the comedian’s use of TRT. So it looks like their rivalry is definitely heating up.

The former UFC double champ Conor McGregor (MMA record 22-6) has been talking about his potential return to the Octagon lately. First, he revealed his interest in the trilogy against his arch-rival Nate Diaz. The pair previously fought at UFC 196 and UFC 202. They are currently 1-1 and the third fight would be the rubber match. However, Conor is not opposed to fighting Dustin Poirier for the fourth time either.

Although he is not available to fight any time soon, there are already some developments on his next opponent. During the UFC 282 fight week, UFC President Dana White revealed that the company is looking at Michael Chandler to be his next opponent. Chandler himself issued a call out to Conor after his UFC 274 victory over Tony Ferguson.

Conor McGregor vs Michael Chandler will be a dream fight for many. Chandler would not want to use his grappling in the fight and would want to beat Conor at his own game. On the other hand, the former Bellator champ also has some issues with his chin. So McGregor will definitely take advantage of that with his dynamic left hand.

Are you excited about a potential showdown between Conor McGregor and Michael Chandler? Let us know in the comments down below.