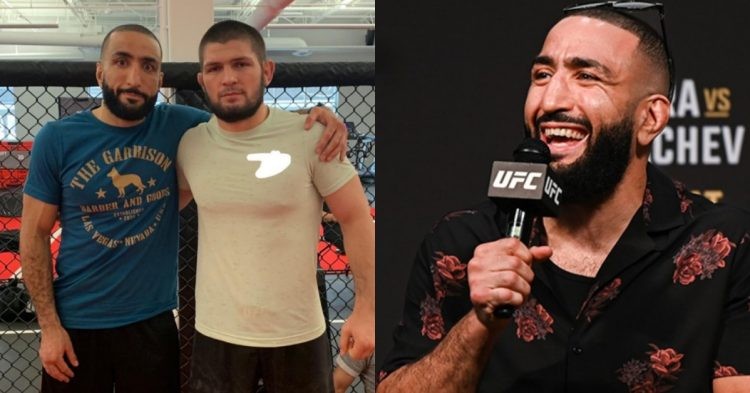 Belal Muhammad will make his return to the Octagon on October 22nd at UFC 280. He will fight the 8th ranked contender in the division, Sean Brady in the prelims of the upcoming PPV. This is going to be a very special fight for him as he will have Khabib Nurmagomedov in his corner!

Team Khabib is currently in the UAE and is holding their training camp in the region. Khabib’s cousin Islam Makhachev will be headlining the PPV. But Islam is not the only one to have Khabib’s attention as Belal Muhammad is also training with the team. In a recent interview with MMA Junkie, Belal revealed how everything came to be.

Both Belal and Khabib are managed by Ali Abdelaziz. Ali was the one who arranged for the welterweight to train with The Eagle. Muhammad described their sparring sessions and compared them with actual fights themselves. He also stated that Nurmagomedov does not agree to corner everybody. But Khabib was impressed with his work ethic.

“Ali called me and he’s like, ‘Khabib said he’s gonna be in your corner? You know he just doesn’t corner anybody. So that means he has respect for you, he knows how hard you’re working and he knows that. You don’t know what it means because won’t just do that for anybody.’ And I was like man, that’s amazing thing. And yeah, with Khabib in my corner, I can’t lose.”

The Bully is coming off an impressive 8-fight unbeaten streak. In his last three fights, he defeated Demian Maia, Stephen Thompson and Vicente Luque. He currently holds the 5th ranking in the 170lbs division and a win over Brady puts him in a spot for a big fight next. On top of that, Belal had the opportunity to pick the brain of one of the best fighters ever. Hence, it will be interesting to see how much he improves.

During the interview, Belal Muhammad spoke a lot about how his fight camp went with Khabib Nurmagomedov. Belal revealed that they bonded a lot over sports. From playing basketball to soccer, Belal revealed how athletic the Dagestani fighters really are. Apparently, Khabib even snapped at the the 34-year-old for not being able to play soccer properly.

However, Belal also got a sneak peek into the next generation of fighters that are coming through the country. Muhammad described them as “next level” and stated that he wants to win the UFC belt as soon as possible and retire on top.

But in order to do that, he has to get by Sean Brady this weekend. Muhammad thinks he has the intelligence to out-grapple Brady and counting him out would be a big mistake.

What are your thoughts on Khabib Nurmagomedov cornering Belal Muhammad? Do you think that puts Sean Brady at an even bigger disadvantage at UFC 280? Let us know in the comments down below.