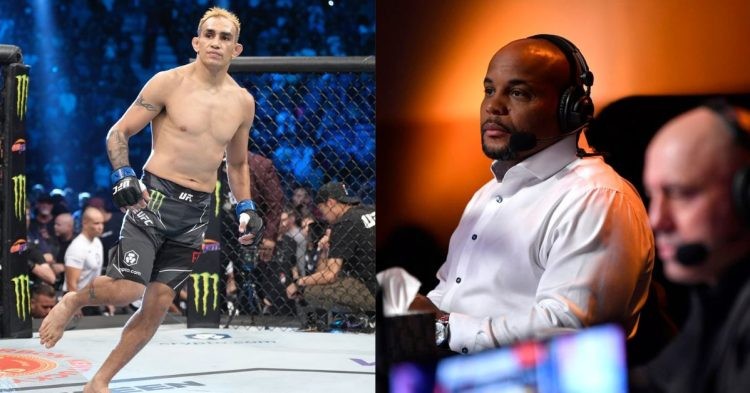 Responding to Cormier’s comments Ferguson wrote @dc_mma Should Put The Sweets Down. Too Much Sugar Will Go To Your Head like Ol’ Fathead Khabieber. Once a hater always a vagina- Champ 🖕😎 -CSO- MF’as 🇺🇸🏆🇲🇽 # 🥇”

This is not the first time we have seen Ferguson starting a war of words with Cormier, few months back at UFC 274 Ferguson was seen trolling Cormier when Charles Oliviera missed weight by half a pound. Following this incident, Ferguson accused the former two-division UFC champion of consuming cocaine. Ferguson initially jibed at Cormier by sharing a clip of the controversial weigh-in from UFC 210 when then-champion ‘DC’ rematched Anthony Johnson for the UFC light heavyweight title. The weigh-ins were marred by controversy after Cormier, who initially weighed in at 1.2 lbs above the maximum limit, appeared to use the support of a towel to make weight. Ferguson’s jibe drew a response from Cormier, who asked the 38-year-old to recover and “spend some time with the family” instead of poking fun at him.

What’s Next for Tony Ferguson

Ferguson is now on a five-fight losing streak. It’s hard to imagine that till 2019 the ‘EL Cucuy’ was on a 12-fight win streak. His downfall has been rapid. Though he has been active, fighting five times in the last 2 years, he doesn’t seem to find his old self back. Like Cormier, many believe it’s time for him to hang the gloves but Ferguson thinks otherwise. After his fight against Diaz, he talked about moving to Jackson wink for his future training. Wink has coached guys like Jon Jones, Alastair Overeem, Anthony Pettis, and many high-caliber fighters. Will that change his fortunes? Time will tell.

But who should he face next? a lot will come down to the weight class. Many believe he’s best at 155, but it wouldn’t be surprising to see him at 170 for his next fight. Also, it would be better if the promotion gives him more fan-friendly matchups.

Whatever is next, it’s certainly hard to see Ferguson’s unexpected sudden decline. You will not be done with the game, the game will be done with you. A true statement for those fighters that hang on to the ‘game’ too long.