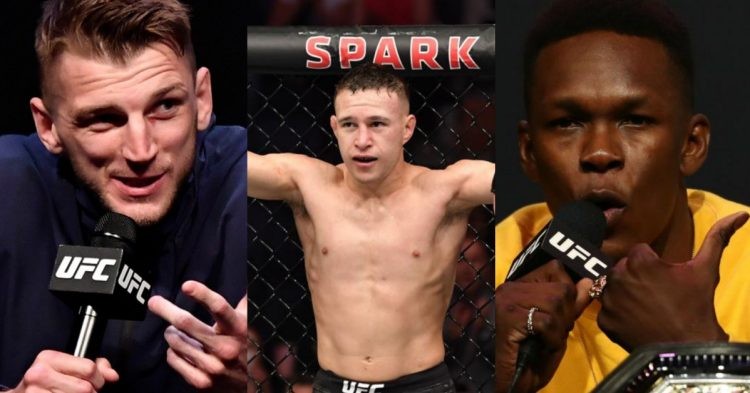 Kai Kara France will be fighting Brandon Moreno in the co-main event of UFC 277 this weekend. The bout will be for the interim UFC Flyweight Championship. Ahead of the contest, Kara France’s teammates Israel Adesanya and Dan Hooker commented on the bout and broke down how the fight may play out.

The current men’s 125lbs champion, Deiveson Figueiredo is out of the picture at the moment with injuries. Hence the company has decided to move forward with an interim title fight between Moreno and Kai. Whereas Moreno is a former champion, this will be the first time for Kai in a championship fight. But his teammates Izzy and The Hangman are more than confident of his chances.

Scores to be settled with titles on the line – #UFC277 fight week starts 𝐑𝐈𝐆𝐇𝐓 𝐍𝐎𝐖!

In a recent video on his YouTube channel, Israel Adesanya was joined by Dan Hooker, where they were predicting the fights on the UFC 277 PPV card. During their conversation, they commented on the co-main where Kai will take on Brandon in a 5 round fight. As expected, Israel Adesanya backed his teammate to get the job done.

“I’m going Kai on this one. Kai, and I’m gonna say it’ll be a dominant Kai victory. Let’s put it that way and I think Moreno might still be, he is a smart guy. I like Moreno as a fighter and a person but I just don’t think where Kai is at right now, he can be f****d with and like you said he’s got something he’s got fighting bigger than himself and there’s a lot riding on him and it’s like a culmination of everything he’s worked for.”

Dan Hooker, on the other hand, brought up the first fight between Moreno and Kai in 2019. During their conversation, Hooker stated that Kai will be able to replicate the success that he had in the first round of the fight. However, he won’t let his guard down like the last time and won’t let the fight slip away.

“I think like it will be the first round of the first fight but that for 5 rounds. I think he just makes Moreno look silly. I think he’s too fit, too composed, too confident in what he’s doing. Yeah, he is just unstoppable right now.”

The first fight was a great 15-minute back and forth between two elite fighters. Both fighters landed a ton of significant strikes at a great pace. But unfortunately for Kai Kara France, Brandon Moreno made some changes to his approach in the latter half of the fight which neutralized Kai’s threat on the feet.

However, if the recent form is any indication, then Kai Kara France does have some advantages over Moreno. The former champ has only faced one opponent in his last 3 fights. So there is a chance that Brandon Moreno has gotten used to a certain style of fighting. Hence, Kai may be the perfect opponent to take advantage of that.

Kai Kara France was already a great striker when they fought the first time. But he has made a lot of improvements over the last 3 years. He looks to be in an unstoppable run right now. So seeing Kai Kara France getting his hand raised at UFC 277 will not be a surprise at all.

Who are you backing to win at UFC 277? Will Kai Kara France be able to get revenge over the former champ? Or Will Brandon Moreno be able to repeat history and set up a fourth fight against Deiveson Figueiredo in the near future? Let us know in the comments below.