“He Just Thinks It’s Hell, He Hates It”- Khamzat Chimaev Hates Cutting Weight for Welterweight, Wants to Fight in Middleweight Next 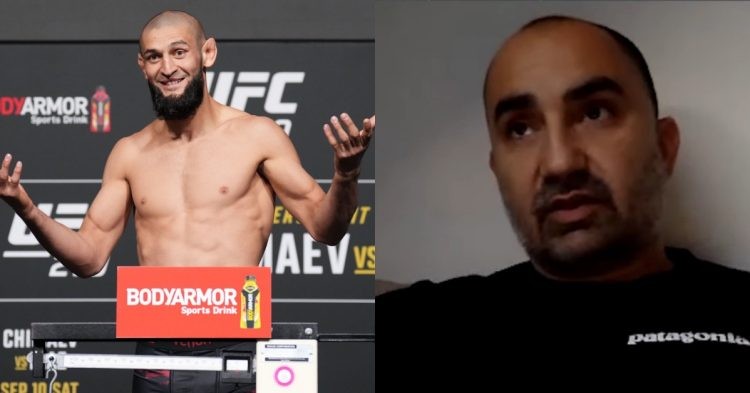 Khamzat Chimaev is most likely to fight at middleweight next! Chimaev was scheduled to headline UFC 279 opposite Nate Diaz. However, the 28-year-old was replaced with Tony Ferguson as he missed weight by 7.5lbs. It has led to speculation that Chimaev may fight at 185lbs in his next fight.

It looks like that will be the case after all. Chimaev’s coach Andreas Michael had an interview with ESPN where he addressed why Khamzat missed weight. According to him, Chimaev was having a lot of trouble cutting weight on that particular night as he was cramping up and started puking. Hence, it is more than likely that Chimaev fights at middleweight next.

“I think the next fight is going to be at middleweight. … The only thing that he thinks is a hassle is the weight cut. He just thinks it’s hell, he hates it. He just wants to train and eat, that’s it.” (h/t via bokamotoespn)

Chimaev’s frame is really large for welterweight. So it meant that he had to be extremely dehydrated to come down to the welterweight limit. So moving up in weight may not be the worst idea for him. Khamzat has already competed in the weight class before, so there is no doubt that he can compete at his best in middleweight.

Khamzat Chimaev is a genetic specimen. He has been able to rag-doll his opponents unlike any other fighter in the UFC. The Borz has fought in the UFC 6 times and have won all of them. Although the bout against Gilbert Burns was a hard-fought one, the other opponents could not land more than one significant strike on him combined!

In his last fight against Kevin Holland, Chimaev just shot for a takedown as soon as possible and took down Holland with ease! It did not take him more than 2:13 minutes of the very first round to submit the Trailblazer. It is important to mention that Kevin previously fought at middleweight. On top of that, Chimaev vs Holland took place at a catchweight of 180lbs.

So the move to middleweight will surely be a tempting one for Swedish fighter. He already has an opponent in sight. Ahead of the last weekend’s PPV, Chimaev had a run-in with former middleweight title contender Paulo Costa. The two went at it inside a UFC performance institute. Fortunately, it did not get physical and nobody was hurt.

But, it did lay a great foundation for a potential fighter between the two. Costa is one of the most physically imposing fighters in the 185lbs division. Not only is he a black belt in BJJ, but Paulo is also one of the most ferocious strikers in the division with knockout power. So the bout between him and Khamzat is a potential show-stopper.

In his last middleweight bout, Khamzat knocked out Gerald with a single punch. So it is obvious that his power carries over to 185lbs as well. Can he replicate something similar against Costa who has an iron chin? Only time will tell!