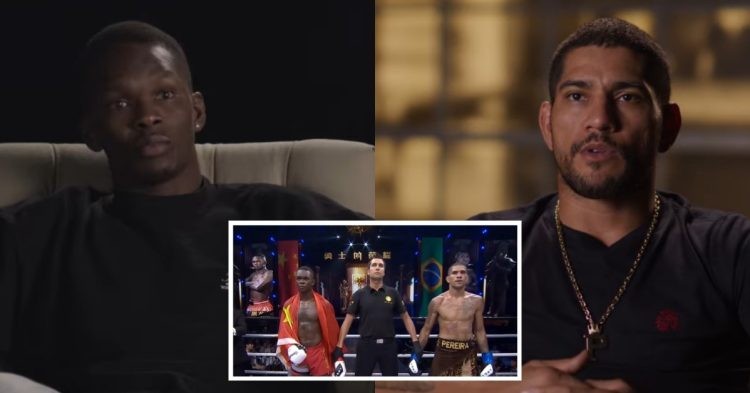 The much-anticipated middleweight title fight between Israel Adesanya and Alex Pereira is almost here. UFC 281 goes down inside the iconic Madison Square Garden on November 12th. Adesanya and Pereira will headline the marquee event this Saturday.

UFC is finally putting out promotional material for the PPV. In the recently released countdown video, both Izzy and Alex spoke about the fight which started their infamous rivalry. On April 2nd 2016, Israel Adesanya faced Alex Pereira for the first time in China. Unlike their second bout, the first contest went the full distance. Although Pereira won the bout, it caught both fighters by surprise.

Izzy stated during the interview that he dominated the bout and should have won the decision. He revealed that even Alex himself was pleasantly surprised once the referee raised his hand.

“I thought like I handily won. You can even see in our faces, he thought he lost that fight. But then when his hand got raised, he was surprised and I was surprised. Sometimes really sh***y judging (costs you the fight),” said Adesanya

However, his first kickboxing bout against Israel Adesanya was not the easiest one of his career. It was evident that Adesanya was the more skilful fighter. Adesanya backed up Pereira on the rope multiple times and landed some big punches that could have ended the bout. Even Alex himself admitted that the bout was a hard one for him.

“My first fight with Adesanya was in China. It was hard. But I was at the beginning of my career.”

Even in their second fight, Adesanya continued the same trend in the first two rounds. But, Pereira did not hang back and tried to land punches of his own. In the third round, Alex pushed the pace and forced Israel Adesanya to stand infront of him and trade blows. Alex knew that he can not beat Adesanya being a technical fighter. Hence, he rushed in and landed a big left hook which flatlined “The last Stylebender.”

If there was any doubt regarding the result of their first fight, Pereira put all the doubts to rest and secured a spectacular KO. The past kickboxing fights have helped to raise the anticipation for their MMA fight at UFC 281.

A majority of the fans think Alex is Adesanya’s kryptonite. Izzy has dominated the 185lbs weight class since joining the UFC. Hence, the prospect of seeing Izzy, taking on the only man to KO him, is a mouth-watering one.