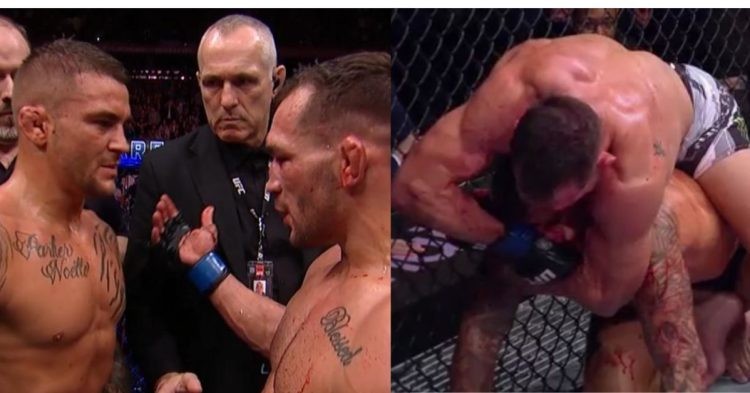 Former interim lightweight champion Dustin Poirier took on Michael Chandler in the highly-anticipated matchup at UFC 281. Poirier was making his comeback aftera submission loss to Charles Oliveira in his last fight. Meanwhile, Chandler last fought Tony Ferguson and got a highlight win with an epic front kick that knocked out Ferguson for the first time in the promotion.

Both of the fighters have shown their tenacity and toughness and the ability to finish off their opponents anytime inside the octagon. Poirier was the favorite against the Chandler going into the fight. And once again Poirier has proved that he is one of the best fighters in the UFC lightweight division.

‘The Diamond’ absorbed a lot of damage early in the fight but was able to stop Chandler with a submission. Though Poirier appreciated the fight Chandler brought to the table he was not too happy with his dirty tricks during the fight. Poirier called out Chandler for his dirty tricks in the post-fight interview. When Chandler was hunting for submission in the second round, he allegedly fish-hooked Poirier.

He’s a little bit more durable than I thought he was gonna be. I had him hurt and then I landed after I hurt him and he was still there. I thought if I hurt him I was gonna put him away.”

Fans also took to Twitter and expressed their opinions about the fight. The replay also confirms that Chandler fish-hooked Poirier. Helwani posted on Twitter:

Replay seems to confirm this.

You didn’t see him pull Dustin’s head back with it?
Or blinding poirer with his blood? Or the back of the head punches.
Dustin escaped tonight.

One fan had this to say:

Chandler is a dirty cheat

Another fight fan stated that Chandler is on steroids and called him out for the illegal punches to back Porier’s of the head:

Plus shots to the back of the head. Steroids making him a dirty fighter.

Chandler was fishing for a sub

Michael Chandler’s fish hook that Poirier was complaining to the ref about 😭😭😭😭😭 pic.twitter.com/et8dQltXBN

According to the fans, Chandler tried everything and went to every extent to get the win. However, Poirier walked away with his hands raised in the end and bounced back.

Michael Chandler was badly hurt going into the first round. And it’s obvious that out of desperation he committed the fouls in the round 2 against Dustin Poirier during their grappling exchanges. However, the fight was certainly a barn burner and exceeded every expectation.

Dustin Poirier submits Michael Chandler in round 3 at UFC 281

From the very start of the fight, both Dustin Poirier and Michael Chandler exploded into each other. Chandler caught Poirier with some big power shots and takedowns, while Poirier had his moment when he rocked Chandler with a right hook.

The 2nd round saw some significant moments as the fight fans saw a lot of explosions. Poirier hit Chandler with a big straight which messed up his nose, while Chandler caught Poirier with a rear naked choke and attempted to submit him.

Poirier was able to escape but Chandler was able to dominate the rest of the round on the ground with some brutal ground-and-pound. Regardless, Poirier hurt Chandler a lot of times in this round with his accurate striking.

Chandler held his ground and showed off his incredible wrestling when he picked up and slammed Poirier on the ground in round 3. However, Poirier walked away with the win as he choked out Chandler after a slick transition. Poirier got a submission win after a long time and showed that he is as dangerous on the ground as he is on his feet.

Watch the post-fight interview below:

After the fight, both of them showed respect towards each other while Poirier confessed that he was very much surprised by Chandler’s durability. With this win, Poirier has bounced back and will look forward to getting back in a title frame for the lightweight belt.