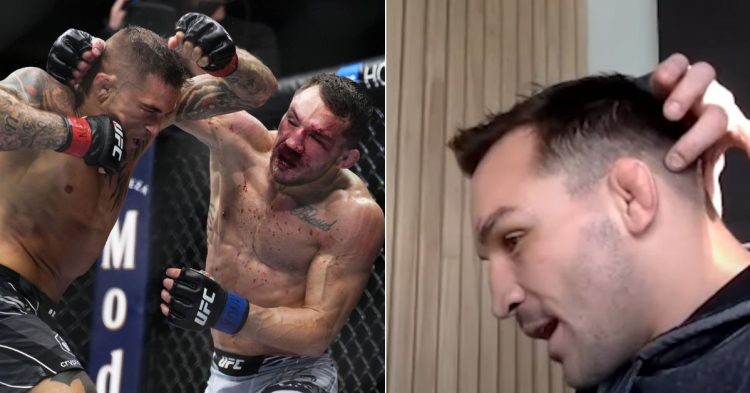 Now, more than a week later, Chandler clarifies that accusation and stays firm that it was partly on Poirier’s part that some of those punches landed on the back of his head. “The back of the head thing is completely false. The referee was right there and I was catching his ear with every single shot. Maybe one shot punched him at the back of his head but that happens in every single fight. And he turned his head into me.” Chandler said.

Chandler further added that even the referee did not feel as though Chandler was landing several illegal shots. He was given a warning during the exchange and immediately adhered to the referee’s instructions. “As soon as he said something, obviously I stopped. It wasn’t like, yeah, screw you, I am punching him at the back of his head and he also did  turn his head.”

Michael Chandler and Dustin Poirier put on a performance of a lifetime at UFC 281. Both the fighters engaged in a brutal back-and-forth fight and after everything was said and done, it was Dustin Poirier who emerged on top with a submission win over Chandler in the third round. In the process, Poirier jumped back to the winning column.

While Chandler denied back-of-the-head shots to Poirier, he did admit that he unintentionally fish-hooked the former interim champion during their grappling exchange in the second round. “Fish-hooking, yes, my hands went into his mouth. I drilled reaching down, grabbing the chin, lifting it up, and going for the rear naked choke about a thousand times.”

Chandler added that the move was in heat of the moment and believes even if he had succeeded in getting a rear-naked choke victory through it, it would have later turned into a no-contest regardless. There was some tension heading into Poirier vs Chandler, and it seems like it will likely continue despite settling it inside the Octagon earlier this month.

Chandler has now won just two fights in his five-fight UFC career and will look to jump back to the winning column in his next fight. Meanwhile, Dustin Poirier will look to get a couple more wins to his name before he can actually start talking about another title shot in the lightweight division.