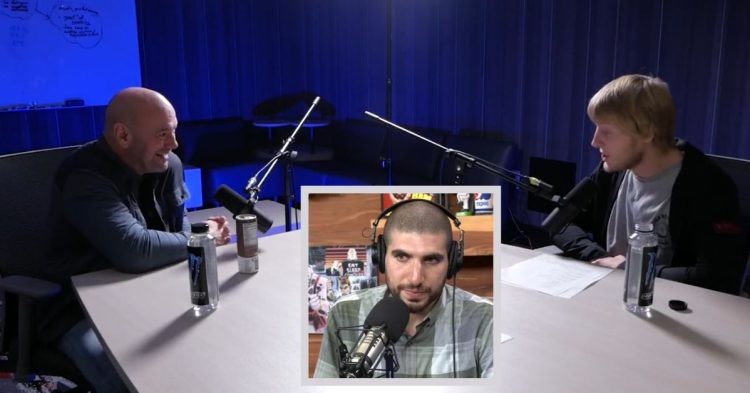 UFC rising star Paddy Pimblett has blasted renowned MMA journalist Ariel Helwani alongside UFC president Dana White. Helwani is a popular figure in the MMA community and has covered the sport for more than a decade.

However, he has been criticized by some fans, fighters, and even White. Helwani and White’s relationship turned bitter a long time ago. Ahead of UFC 282, White appeared in a podcast hosted by Pimblett. ‘The Baddy’ started a rant against Helwani and White happily joins in. Pimblett said:

“I hate all these journalists, especially the ones who earn off us. Ariel Helwani, in particular, loves earning money off fighters. Every decent job he’s had, he’s been sacked from. And now he’s just a biased content creator.”

“He uses fighters for clicks, uses fighters to make money, and then has the audacity to talk about the UFC and yourself, saying that they don’t pay the fighters enough. Get your dough out Ariel,” Pimblett continued.

Pimblett shared his views on Helwani and his take on the fighter’s pay issue. ‘The Baddy’ said that Helwani is a biased content creator now and uses click baits and fighter’s names to make money. According to the Scouser, Helwani is a “rodent” and is no friend of any fighter despite what he shows.

Helwani worked with ESPN and used to cover UFC but now he hasn’t been seen in a while since he departed from ESPN. The Canadian reporter has a podcast channel now called “The MMA Hour with Ariel Helwani” and there he hosts popular sportspersons.

UFC president Dana White has always hated Helwani and at some point, White had Helwani banned from the UFC for a lifetime. White seemed to have enjoyed the rant and joined with Paddy Pimblett to add some more harsh words toward the 40-year-old journalist.

In the same podcast, White said: “You know what the great thing is about him? He’s completely fuc**ng disappeared. Since ESPN let him go… nothing even pops up. I hear nothing about him; I see nothing about him.”

“I literally don’t even know that guy exists unless somebody brings him up to me. You’re absolutely right, he’s a piece of s**t.”

According to White, Helwani is a “slimiest, scummiest mother***er” and he is very happy that Helwani’s name doesn’t pop up now after ESPN let him go. Apart from White, Helwani had beef with many popular MMA personalities like Joe Rogan and some fighters.

Helwani is known as one of the leading sports reporters in the sport however, he has faced backlash for his media coverage before. Both Pimblett and White agreed that Helwani uses fighters to get his own money and his departure from the UFC is good riddance.