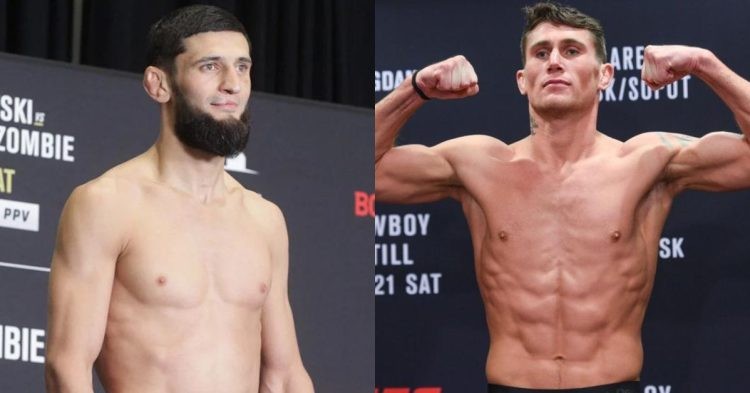 Seems like there’s a new feud right around the corner in the form of Darren Till and rising prospect Khamzat Chimaev. Earlier, former welterweight title challenger Darren Till had called out Khamzat Chimaev after the Chechnyan fighter failed to land a big fight post his big win over Gerald Meerschaert this past month. Chimaev is currently riding on a three-fight win-streak, with multiple victories at the middleweight victories.

Khamzat Chimaev continues to compete at both the welterweight and the middleweight division. He has stated that he is looking for a title shot at the 170-pound division. However, that has not stopped Chimaev from calling out Middleweight champion Israel Adesanya. Darren Till hit back at Chimaev after the Russian fighter claimed that it would be an easy night for Chimaev.

Trust me @KChimaev will fall before my knees, it’s not even gonna be close.

“Trust me Chimaev will fall before my knees it’s not even gonna be close.” Till said. Chimaev seems to have passed down the possibility

Darren Till lays out his 2021 plans

In a tweet, Darren Till hinted at his future plans going forward in 2021. Till is scheduled to take on Jack Hermansson in December, post which, he is hinting at an epic showdown against Khamzat Chimaev.

Jack Hermansson is a seasoned grappler who is coming off an incredible submission win over former interim Middleweight champion Kelvin Gastelum. Till is a striker, who is often criticized for his relatively weaker ground game. Going into his comeback fight after an impressive outing against former champion Robert Whittaker, Till is hinting at a title opportunity against Israel Adesanya with back to back wins.

Also Read I Nate Diaz Hits Back At Dustin Poirier

Going into the Hermansson fight, Till is looking for another showdown with an experienced wrestler like Khamzat Chimaev, post which Till’s popularity could plummet him to a title fight. It will be interesting to see Till’s career going forward considering even the Middleweight champion Israel Adesanya has expressed his interest in fighting Till at some point.