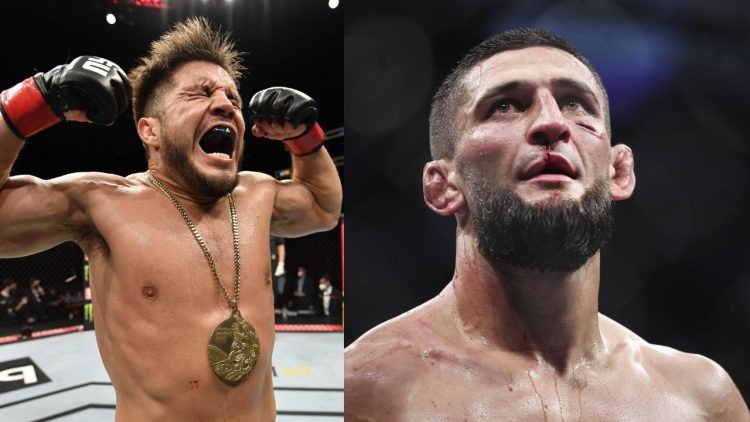 Khamzat Chimaev has steamrolled his way into the UFC. Seemingly untouchable in most of his fights, the Chechen fighter apparently has no weaknesses. However, just like every fighter, Khamzat is also beatable, as Henry Cejudo believes.

Henry Cejudo recently did an analysis of Khamzat Chimaev’s wrestling. For this, Cejudo listed the three ‘T’s technique (techiole?), tactics, and threshold that fighters should follow in order to hold their own against ‘Borz’.

Under the technique segment, Henry talks specifically about the do’s and don’ts while fighting Chimaev. “When I talk about threshold, I talk about the gas tank and I say, ‘We have to drag the fight out.’ … Even if he [Khamzat Chimaev] does take you down, even if he does all that other stuff, like, you make him fight and make him earn every single takedown because you do want to test this man.”

Further, Cejudo reveals his analysis of Chimaev’s UFC 279 bout with Kevin Holland. “There’s one thing I did see… and that was with Kevin Holland. Even though he got rid of him in 2 minutes and 36 seconds… As he was getting ready to go for that D’Arce [choke], his belly was going up and down. His mouth started opening up.”

‘Triple C’ also brings a lot of attention to Khamzat’s fight against Gilbert Burns. Throughout his dominant run, Burns was the only opponent, Borz struggled to put away. As Cejudo highlights, this was due to Gilbert pushing Khamzat out of his comfort zone and forcing him into a firefight.

Khamzat Chimaev epitomizes an ideal wrestler. Quick takedowns, top-notch grappling, and suffocating submission skills make him a really difficult opponent. Previously, we have seen how dominant Khamzat is with his wrestling, ragdolling the likes of Li Jingliang and Kevin Holland.

As such, Aljamain Sterling also shared his thoughts on who would be a real challenge for Khamzat. “ I see a guy like Belal Muhammad, who may not be the strongest grappler, but he’s a strong-built dude who uses a grinding style to press you against the cage to neutralize your position…He’s a strong, shredded dude… I think it’s going to take a guy, or should I say style, like that for Chimaev to run into that’s going to be his equal.”

Currently, Belal is scheduled to fight another upcoming talent in Sean Brady. Thus many feel, that if Belal wins that fight, he should be the next to have a go at Khamzat. However, other names like Colby Covington or Paulo Costa (185 lbs) have also been touted. Who will Khamzat fight next? Only time will tell.