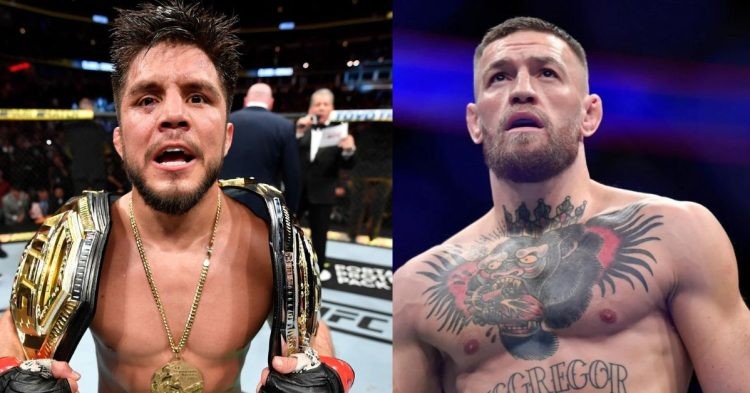 Former UFC champion Henry Cejudo has taken another shot at Conor McGregor, for his NSFW video that McGregor uploaded on his Instagram a few days ago and later deleted it. Cejudo uploaded a video on his Youtube channel titled “Why Conor McGregor SUCKS”.

The video started with Henry mocking Dillon Danis, hinting that it was Dillon who was in the video. Danis has been long involved with McGregor and faced a lot of criticism for many controversies.

Even though Dillon is not an active fighter, he likes to stay in the spotlight. In the intro Cejudo said:

“This person right here is actually Dild* [Dillon] Danis. You guys talk about BFF, somebody that can take them for the team. That’s a good friend ladies and gentlemen.”

Henry criticized Conor for his strange abs workout and called him the true “King of Cringe” for he’s out there “twerking”.

‘Triple C’ and ‘The Notorious’ have long taken shots at each other, trolling each other on social media. It started with Cejudo criticizing McGregor for his striking technique and giving him pointers after Conor broke his leg against Dustin Poirier at UFC 264. There was even a possibility of the two facing each other in a lightweight matchup.

Although the video was about Henry Cejudo taking hits at Conor McGregor, it also had some breakdown of the training that the Irishman is having in his yacht. Henry also had some legitimate criticism for the striking as well.

“Can Conor crack? Absolutely he can crack, but he’s also in range. Pads don’t hit back,” Cejudo said.

“You can have knees coming in, you can get taken down, which is his biggest thing. There’s a lot of things Conor really needs to work on. All these movements back and forth and then, boom, he goes. That’s stuff is not going to help him. That stuff is going to get him tired. It’s better for Conor to use his energy more efficiently,” Cejudo added.

The seven-minute video had Henry giving McGregor some serious pointers about his techniques. He took a deep dive into the training clips and pointed out some flaws in his game and even offered tips for getting better. ‘Triple C’ stated:

“Conor McGregor, I’m going to give you some tips here…

Study your positions, study fakes, study feints, study the real distance game, adjust your stance, because if you’re able to do that, Conor, maybe, just maybe you’ll be able to be a top contender.”

As per the report, McGregor will make his return by the first months of the next year. He has ended the USADA testing pool and his coach believes he will fight by the end of the year.