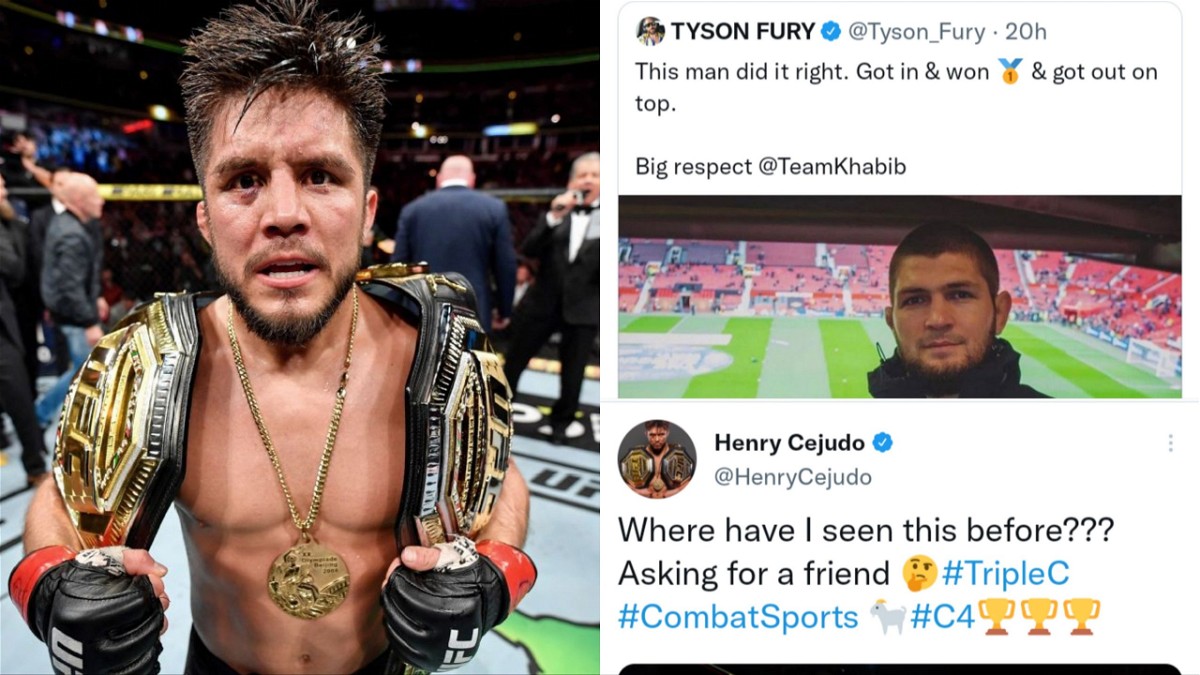 Henry Cejudo is not amused by Tyson Fury’s remarks on Khabib Nurmagomedov. Earlier today, the WBC and The Ring Lineal heavyweight champion posted a picture of the former UFC lightweight champion on his timeline.

He praised Khabib’s decision to retire at the height of his powers. Nurmagomedov recently visited England to attend an event. He decided to stop English footballing giants Manchester United’s home stadium ‘Old Trafford’ to visit his friend Cristiano Ronaldo.

‘Manchester United’ just happens to be the boyhood club of ‘The Gypsy King.’ Hence, he chose a photo of Khabib holding up a Man United jersey with ‘Khabib’ on the back. Fury wrote, “This man did it right. Got in & won & got out on top. Big respect”

However, the former UFC double champ Henry Cejudo was not impressed with his omission. Cejudo retired from active competition after defending his 135lbs belt against Dominic Cruz at UFC 249. He relinquished both of his belts and walked away in order to start a family.

Referring to that, Cejudo replied to Tyson Fury’s tweet. He wrote, “Where have I seen this before??? Asking for a friend,”

Henry Cejudo is planning a return to UFC

After calling it quits back in 2020, the Olympic gold medalist has publicly stated his wish to come back to fighting multiple times. According to recent reports, he has re-entered the USADA testing pool. A return to competition seems inevitable now.

Chael Sonnen (@ChaelSonnen) reveals Henry Cejudo (@HenryCejudo) is back in the USADA testing pool and training twice a day for his comeback ???? #UFC #MMAhttps://t.co/vFbV3MFX8C

Former UFC middleweight title contender and Henry’s Eagle FC broadcast partner Chael Sonnen has revealed that Cejudo is focused on the featherweight division. According to Sonnen, the 34-year old is not only targetting the 145lbs champion Alexander Volkanovski, but Cejudo also wants to fight the other contenders as well.

No country, no man is safe from the wrath of Triple C! #andnew ???????? pic.twitter.com/Mp6yjiaDxB

Although predicting a timeline for Henry Cejudo’s return fight is difficult, he will certainly be itching to get back in the Octagon. Will he return to fighting for the belt straight away? Only time will tell.