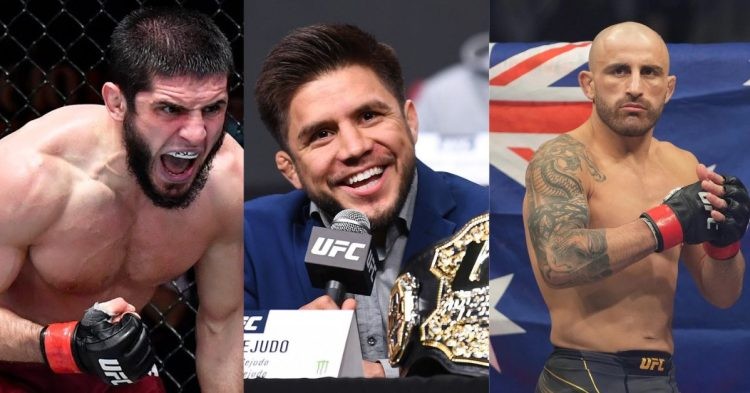 Henry Cejudo might have retired from fighting but he is still as relevant as ever. He discusses contemporary issues in the MMA world across platforms. He recently had a hot take on the upcoming card.

Islam Makhachev is set to fight Charles Oliveira this weekend at UFC 280. It is a highly anticipated bout of two very high-level fighters with different styles of fighting.

Usually, in such bouts, there is always a backup fighter to save the card if one of the fighters has to pull out from the bout. Alexander Volkanovski was booked as a backup for this bout. To, Henry thought that this decision was not wise on the part of the current featherweight champion.

For a number of reasons, he believes Volkanovski’s recent decision to accept the backup role in the UFC 280 main event is not flair. Considering, Volkanovski is turning around to travel across the globe for a fight that might not even take place after having surgery recently.

Also, Volkanovski will probably face the winner of Oliveira vs. Makhachev regardless, given his reputation as the top pound-for-pound fighter in the world. He should have waited and had the fight in the right state of mind.

In his latest youtube video, he stated. “Alexander Volkanovski, No. 1, you’re going to get that second title shot. The UFC confirmed to you, you’re the next person in line to fight for the lightweight title. Why don’t you just wait?”

Cejudo believes that Oliveira would withdraw, which would put Volkanovski up against Makhachev in a bad match-up for him.

With his knowledge and experience, Henry Cejudo has previously stated that a prospective bout between him and Volkanovski may be one of the largest moneymakers in the organization’s history. Since announcing his retirement in 2020 following his victory over Dominick Cruz at UFC 249, Cejudo hasn’t stepped foot inside the octagon.

After an impressive run of dominating the featherweight division, Volkanovski climbed to No. 2 in the P4P rankings. To do the unfathomable and make history in the octagon against the champion will be a huge undertaking for Cejudo.

However, Cejudo has made it clear that he intends to go on Volkanovski for the featherweight championship after rejoining the USADA pool earlier this year. Cejudo wants to make history by becoming the first fighter to hold the title in three different weight classes.

Claressa Shields vs Savannah Marshall: Stats, Height, Reach and Age Difference Between Both the Rivals