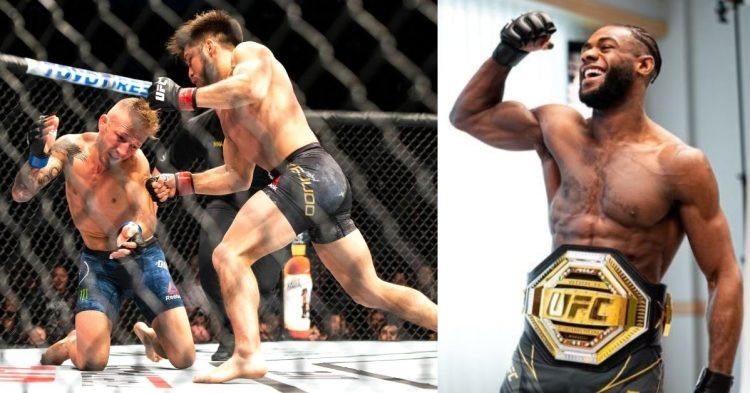 Henry Cejudo AKA Triple C was seen giving some crucial tips to the current Bantamweight Champion Aljamain Sterling ahead of his title defense against TJ Dillashaw at UFC 280 this October.

In a video posted by Cejudo on his YouTube channel, he was seen chilling with the number three bantamweight contender Merab Dvalishvili and Aljamain Sterling. Sharing his experience with Sterling, Cejudo said “Whenever he (TJ Dillashaw) does start those combination, just stay. Stay there. Pop off”.

For a few months now Cejudo is often seen talking about his potential return to the UFC after the former two-division champ retired back in 2020 after his title defense against Dominic Cruz. A few months ago Cejudo and Sterling even did a faceoff interview for Daniel Cormier’s YouTube channel. Cejudo said, “I’m going to expose him,”. He’s got a lot of flaws. He’s got an ability to him, and I think that is his greatest asset. His limbs. … I think he’s easy money. … He’s got the belt, but he’s not the best in the world.”

In his reply to Cejudo Sterling said “I like my chances,” Sterling said. “I like proving people wrong. It’s satisfying. There’s something very satisfying about taking your sh*t, then being the guy walks away like, ‘How bout that?”.

If Henry Cejudo ever comes back that is probably the fight to make. With all that Cejudo has accomplished in his career, it wouldn’t be surprising to see him walk straight into a title fight.

Henry Cejudo vs TJ Dillashaw: How did it go?

Henry Cejudo is certainly the guy Sterling can go to for any advice as he was the one who defeated Dillashaw for his first Bantamweight title defense. And he did that in some fashion by finishing him in just 32 seconds.

Cejudo and Dillashaw were first scheduled to fight at UFC 233. But the whole pay-per-view was canceled due to various reasons. Cejudo and Dillashaw eventually fought at UFC Fight Night 143, with Cejudo absolutely destroying Dillashaw inside a freaking minute Dillashaw bounced around but ate a big punch that dropped him to a knee. Cejudo pounced on him and finished the fight in almost half a minute.

The fight tho was marred by controversy afterward as The USADA convicted T.J. Dillashaw for using the performance-enhancing drug EPO. Later, Dillashaw accepted a two-year suspension for the same.