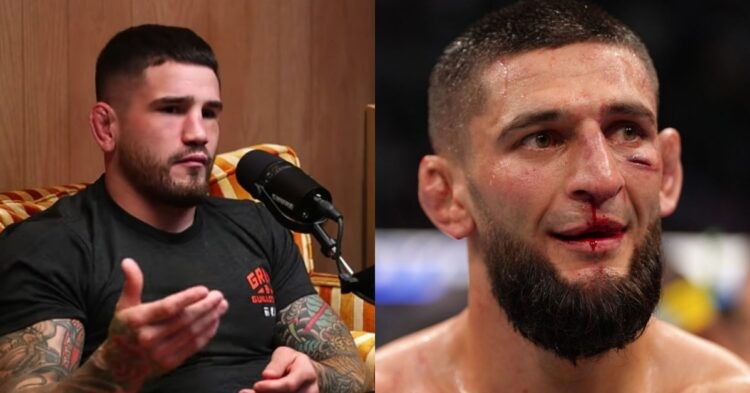 Sean Brady defends Khamzat Chimaev for his tough fight against Gilbert Burns. The rising welterweight prospect recently appeared on ‘Morning Kombat’ hosted by Luke Thomas and Brian Campbell. Speaking to them, Brady commented on the Chimaev-Burns fight at UFC 273. After a hard-fought 25-minutes, Khamzat got the win via judges’ decision.

On April 9th, then no. 11 ranked 170lbs fighter Khamzat Chimaev took on 2nd ranked Gilbert Burns. Coming into the fight, fans seemed confident that Chimaev will get the job done fairly easily. But things did not quite play out that way Gilbert showed why he was the no. 2 welterweight fighter in the world. Not only did he not land over 100 significant punches, Burns almost knocked Khamzat out on the feet.

Despite Chimaev winning, a lot of chatter went on for weeks about whether the Chechnya native was overhyped or not. But Belal Muhammad came out in The Borz‘s defence and said that the match-up against Gilbert was always going to be a tough challenge for Khamzat. Brady echoed the same sentiments during the interview. He said,

“I’ve seen a lot of people giving Khamzat sh*t because he had a tough fight. I feel like people thought Khamzat was going to go in there, and f*cking shoot lasers out of his eyes.”

“He’s a human. Yeah, he’s very very good and he mauled a couple of guys who weren’t that good, and skilled but Gilbert, I knew that was not going to happen.”

Just like Khamzat Chimaev, Sean Brady is also an undefeated fighter with a record of 5-0 in the UFC. Overall Brady has an unblemished record of 15-0 in his career. He already has victories over the likes of Jake Matthews and Michael Chiesa in the UFC. Since beating Chiesa last November, Brady hasn’t had a fight since then. At the moment, he is not even matched up against anyone for a fight. But he did have a back and forth with Dustin Poirier recently. However, it is unlikely that the fight happens.

But one fight which is much more likely to take place in the near future is Khamzat Chimaev vs Sean Brady. Brady is placed in 9th position in the division, whereas Chimaev is at 3rd, thanks to his win over Gilbert Burns. In the interview, Sean spoke about possibly facing Chimaev down the line. According to him, Chimaev has the potential to beat all the fighters in the weight class except him. He has foreseen a clash between the two and Brady thinks he will be the one to get his hand raised if they fight.