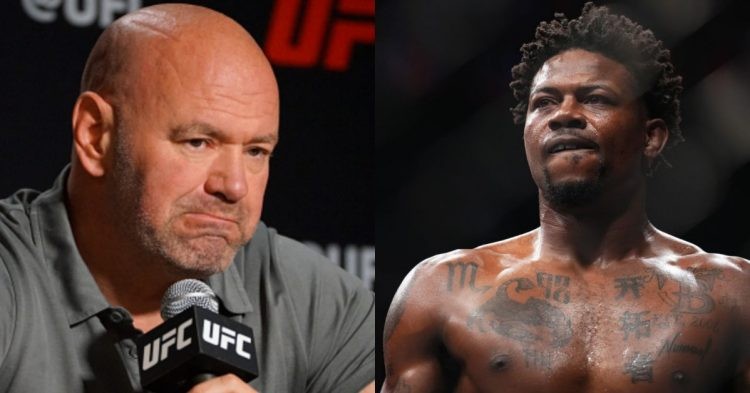 In a shocking move, Kevin Holland decided to retire after losing to Khamzat Chimaev at UFC 279. The bout was a humiliating one for him as he failed to land even one strike against Chimaev in the co-main event of the last PPV. According to UFC President Dana White, it is one of the reasons why Kevin ultimately hung up his gloves.

Following DWCS 56, Dana was asked about the situation with Holland. Shortly after the defeat against Khamzat, Holland took to Instagram and stated that he had a decent career in MMA. However, it is time for him to explore other career options. At the age of 29, the retirement comes as a surprise to the fans. Even Dana thinks the decision to retire is a bit premature.

“We talked about that too, obviously, you know I’m really close to this kid and I like him a lot and I think when you are competing in a sport like this and you’ve done the things that Kevin Holland has done, you know, he gets out of the fight with Brunson and he realizes that he needs to work on his wrestling more.”

“So he dives in, starts working on his wrestling and I think when what happened to him, happens to you, I don’t know, I think you lay in bed at night going ‘holy sh*t, how did that happen to me?'”

Retirements in Mixed Martial Arts (MMA) are never permanent. As Dana alluded to, Kevin was obviously hurt by the method of his last loss. But that is not it, he was also dominated by other wrestlers like Marvin Vettori and Derek Brunson. Primarily known for his striking skills, he needed to work a lot on his grappling. However, Holland decided to walk away instead.

Hence, there is always a chance that the Trailblazer comes back to the company after a year or two with better grappling skills. As fans know, Dana White is extremely fond of him and calls him ‘big mouth.’ So UFC will always welcome him back as long as Dana is in charge of the company.

Dana White is a big fan of Kevin Holland

As Dana White previously stated, he is very close to Kevin Holland. However, that was not always the case. In 2018, Dana revealed the story of how he became one of Holland’s biggest fans! Kevin fought Will Santiago Jr at DWCS 9 in June of 2018. However, White did not like him at all as Holland apparently talked trash the whole time during the fight.

It made such a bad impression on him that Dana did not want to give Holland a contract to fight in the UFC. However, at UFC 227, the company needed an opponent for Thiago Santos. Although many fighters were offered the fight, none accepted except Holland. It instantly changed Dana’s opinion of him. Although he lost the fight, UFC kept him around.

Kevin had a terrific 2020 as he won five successive fights in the year which included wins over Joaquin Buckley and Jacare Souza. It remains a highlight of his career. He never said no to a fight and that trend continued till his last fight. He accepted the fight against Khamzat Chimaev on hours’ notice. Regardless of wins and losses, he was highly regarded for the entertainment value he brought to the table.