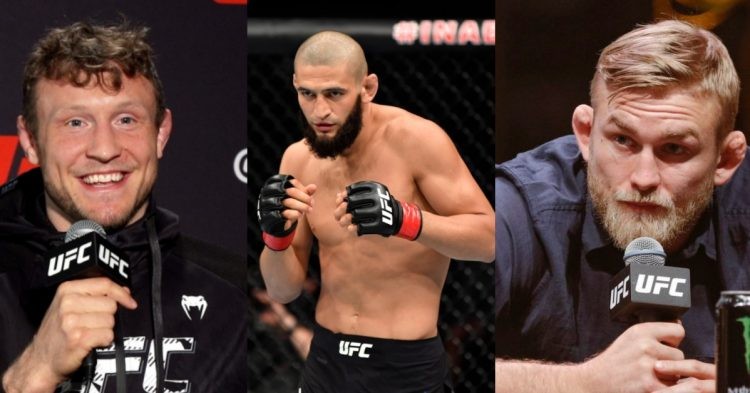 Khamzat Chimaev vs Nate Diaz is official for UFC 279. It is a piece of very public information that Nate Diaz only has 1 fight left in his contract. Although there were talks of Nate fighting Dustin Poirier or Conor McGregor, the UFC ultimately decided to put Nate up against Khamzat Chimaev.

It is not an easy task for Nate Diaz to go up against someone like Chimaev. Khamzat is almost 10 years younger than Nate and is on track to fight Kamaru Usman for the UFC Welterweight Championship. He is massive for the weight class and holds a lot of power behind his punches. On paper, he is a nightmare match-up for the younger Diaz brother.

Contracts have not been signed, but both fighters have verbally agreed to the matchup. pic.twitter.com/sWd1cc6ibm

The fans have seen Nate struggle against power punchers in the past. Rory MacDonald rag-dolled him during their clash at UFC 129. He also suffered the only TKO loss against Josh Thomson who possessed power behind his strikes. Even recently, Jorge Masvidal handed Nate the beating of a lifetime. By the looks of it, Khamzat may just become the very first fight to knock out Diaz.

Jack Hermansson and Alexander Gustafsson, the training partners of Chimaev, think that The Borz will dominate Nate during their clash at UFC 279. The Joker, who fights Chris Curtis at the upcoming UFC London, thinks Nate has the worst possible fight as his outgoing present.

“I really respect Nate and everything he’s done. But I feel like he’s getting thrown to ‘The Wolf’ now. Literally.” (h/t via MMA JUNKIE)

Former UFC light heavyweight title challenger Alexander Gustafsson also agrees with Jack. He will be making his return at UFC London too. During an interview for the event, Gustafsson spoke about Chimaev vs Diaz.

“Amazing, he’s gonna do what he’s doing all the time, Khamzat. He’s just gonna go in there and beat him up. He’s ready, he’s ready for the (fight). I know you all seen him and whatever they put infront of him, he’s gonna beat it up. He’s ready.”

As mentioned above, Khamzat Chimaev is training partners with Alexander Gustafsson and Jack Hermansson. They train at Allstar gym which is based in Stockholm, Sweden. There are multiple occasions where Chimaev was seen training with both Alex and Jack. In a famous sparring video, Khamzat dropped Gustafsson with a body shot.

In 2021, Khamzat had a friendly wrestling match with Hermansson where he dominated Jack. But the 34-year-old held no grudge against Chimaev as they were friends. Having two elite fighters like them as sparring partners really helps Chimaev in his quest to win the UFC gold. But in order to do that, Chimaev will have to go through Nate first.

UFC 279 will mark the first occasion when Khamzat Chimaev will be in the main event of a UFC PPV card. Usually, the PPV main event slots are reserved for title fights.

But it’s a testament to Chimaev and Nate’s star power that their fight will headline a PPV card without having a belt on the line. If Khamzat does beat Nate as expected, the only logical next bout will be the title fight against the winner of Usman vs Edwards 2 at UFC 278 in August.