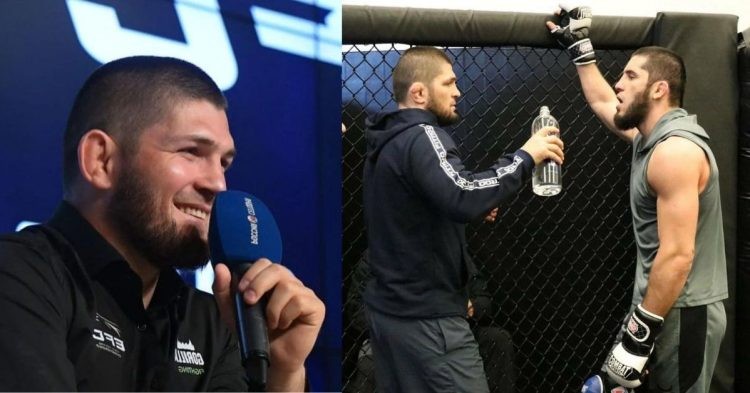 Islam Makhachev and Khabib Nurmagomedov have grown up together in the republic of Dagestan. The pair share a special bond and have frequently expressed their support for one another to the media.

Since his retirement in 2020, Khabib has taken on the role of a trainer and coach for Makhachev. The duo has been unbeatable ever since and Islam is very close to becoming the lightweight champion of the UFC.

Speaking to Daniel Cormier about Islam, Khabib recalls a special memory. “It was 2000, like 21 years ago, we are going to same school, Islam and me and he was younger than me like 3 years. In gym, they go to tournament in other city. He and my big brother Shamil, they go like 15 people, only 2 guys become champion, Islam and Shamil.” The Eagle continues, “Okay Shamil is the champion I understand, but who are you? He’s like small guy, 24 kilo and he come back with gold medal. Since that time and now (2022), like 20 years this guy keep doing the same thing (winning).”

Islam currently holds a fight record of 22 wins and 1 loss to his name. Prior to his MMA career, Makhachev was a Combat Sambo World Champion. He is currently ranked fourth in the UFC lightweight division.

In his time fighting in the UFC, Islam has been beaten only once and has since been on a 10-fight win streak. Some of his most notable wins include Drew Dober, Thiago Moises, Bobby Green, and Dan Hooker.

How is Khabib helping Islam Makhachev prepare for UFC 280?

Islam takes on former champ Charles Oliveira at UFC 280 for the vacant lightweight title. Previously, Oliveira had to forfeit his belt after missing weight at UFC 274. Moreover, Oliveira has been on a streak, beating top names like Michael Chandler, Dustin Poirier, and most recently Justin Gaethje.

Although Khabib believes Islam will roll over Oliveira, the fight will surely be far from easy for either side. As such, Islam will have to make good on his lifelong training and do his mentor proud to become a champion like he once did. Will Islam win against Oliveira? If he does, who do you see him fight next? Leave your thoughts in the comments below.