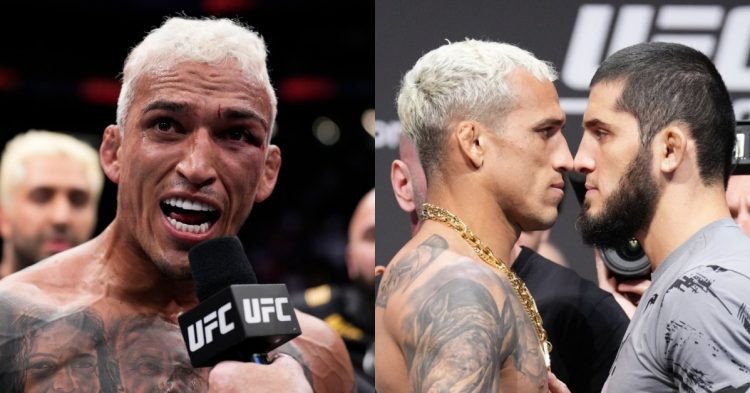 Fans already know that UFC lightweight champion Islam Makhachev is scheduled to face Alexander Volkanovski at UFC 284. It is a quick turnaround, considering the fact that Makhachev just fought at UFC 280 in October. In the much-hyped PPV event, Islam beat Charles Oliveira via submission to become the lightweight champ.

In the post-fight ceremony, Islam and Alex faced off in the Octagon and UFC booked the fight soon afterward. However, in a fascinating revelation, it seems like UFC prioritized an immediate rematch instead of the Volkanovsski fight! Oliveira’s Chute Boxe coach Diego Lima revealed that UFC wanted to make the fight for the upcoming January PPV.

UFC 283 is set to take place on January 21st in Rio de Janeiro. Although there is already a flyweight title fight between Deiveson Figueiredo and Brandon Moreno, the event still needs a big selling point. Hence, the hometown boy Charles Oliveira looking for revenge against Islam Makhachev would have been the ideal fit. As per Lima, the company was close to making the fight!

“When we were going to face Makhachev. We showed a lot of interest in fighting him in Rio. One week after [UFC 280], the UFC got in touch with us. They gave us the opportunity to fight [Makhachev] in Rio. They have always been really good to us. We have really good talks. It was up to us to accept or not,” said Lima.

Immediately after the fight at UFC 280, the former lightweight champion Charles Oliveira expressed his interest in the rematch. Speaking in his post-fight interview, Charles asked the UFC to run the fight back. However, Oliveira ultimately decided to turn down the offer. In his interview with Super Lutas, Oliveira’s coach Diego Lima cited exhaustion as the main reason.

Do Bronx has not had a light schedule in the last couple of years. His resurgence started with a big win over Kevin Lee in March 2020. Later that year, he fought Tony Ferguson at UFC 256.

Afterward, he fought the likes of Michael Chandler (for the vacant title), Dustin Poirier, Justin Gaethje, and Islam Makhachev respectively. Although Charles is not injured, he is certainly burnt out after fighting so many elite opponents.

“I talked it over with Charles. He’s not injured, but there’s an emotional stress. It’s way beyond physical. Charles is the only fighter that has faced all the top 5 guys within a year. Champs normally hide, they want to fight once a year. That’s not Charles, but Rio is way too close now. We prefer to give Charles a well-deserved vacation.” (h/t via Bloody Elbow)

Although he did not go into the details, Oliveira kind of confirmed it when he was linked to fighting Rafael Fiziev. Oliveria tweeted that he was not ready to fight so soon after such a tough loss against Islam Makhachev.

Later, a fake Twitter account impersonating MMA journalist Ariel Helwani spread the false news that Oliveira was set to fight Conor McGregor. Needless to say, there was no truth to it.

So what is next for Charles Oliveira? By the sounds of it, he is set to take a long vacation to refresh his mind. But, will he get the opportunity to fight for the title immediately upon his return? Only time will tell.