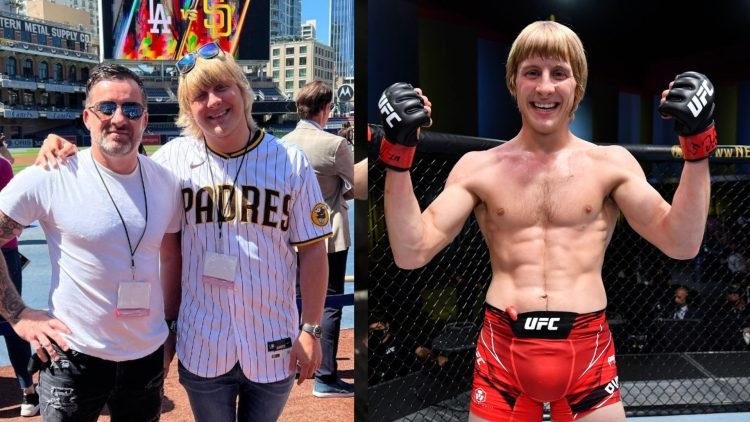 Paddy Pimblett with his manager Graham Boylan (Images via: Twitter)

UFC lightweight Paddy Pimblett has garnered a lot of attention since his debut with the company. Most recently in action against Rodrigo Vargas in March earlier this year, Pimblett is currently gearing up for his third fight under the UFC promotion.

Ahead of his July 23rd bout against Jordan Leavitt, his manager, Graham Boylan has revealed that ‘Baddy’ has signed a new contract with the company. He revealed that every fighter has a standard contract with the UFC in their initial days, however, they are offered a better contract if deserved. During an interview with the Daily Mirror Boylan said:

“Everybody goes into the UFC on a standard contract. There’s no difference what you do, you have to go and prove yourself. I can categorically tell you now that contract’s gone, that’s gone, he’s on f**king big money now. It is what it is, but I’m just happy for him.”

It is worth noting that the UFC came under a lot of heat after it was revealed that Paddy Pimblett was guaranteed only $12,000 for his last bout. However, he ended up securing $74,000 following his win over Jordan Leavitt.

Moreover, if Paddy Pimblett continues to shine under the company and becomes even more popular amongst the fans, we can certainly see him becoming one of the highest-paid fighters in the UFC in the future.

Logan Paul has expressed his desire of wanting to fight in the UFC on many occasions. While many think that it would be a horrific idea, he has his eyes set on ‘Baddy’. ‘The Maverick’ has called out Pimblett on many occasions and believes he can beat him.

However, there is a significant weight difference between the two. Even though Paddy Pimblett goes up to nearly the same weight as Logan Paul’s i.e., 190lbs, his fighting weight is much lesser. Because of the same reason, it is very unlikely that the two will ever cross paths inside the octagon.

Paddy Pimblett will certainly look to build upon his resume and take on real fighters in the UFC that will eventually lead up to a potential title opportunity. With that being said, it will be interesting to see what lies ahead of Pimblett’s fight against Jordan Leavitt on July 23rd.