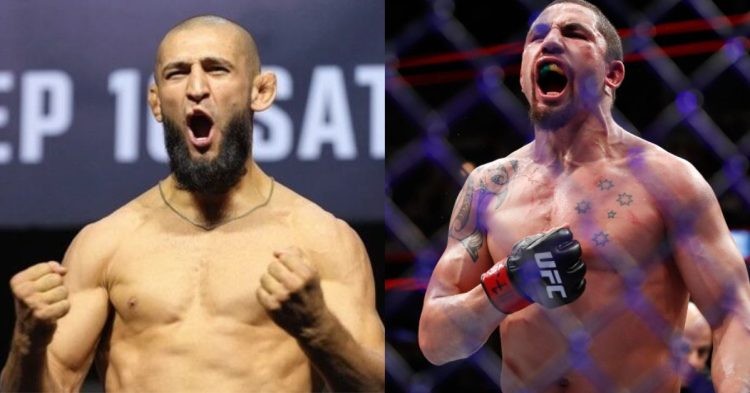 Khamzat Chimaev is now 6-0 in the UFC after dominating Kevin Holland at UFC 279. He had no problem dealing with Kevin and once again showed why he has been called the scariest guy on the roster.

However, since Chimaev could not make his weight for his main event fight against Diaz, many have speculated if he would step up a class and if so then how will he perform in the middleweight division.

So far in his UFC career, he has competed twice in the middleweight division and three times at welterweight before Saturday’s sudden catchweight bout against Holland.

When asked if he would want to fight Robert Whittaker, he showed respect towards the former champion and said he would rather train with Robert than fight.

“I want to train with that guy. He’s really good, like one of the best guys in the world.”

Talking about Whittaker, Khamzat said that he is a big fan of the former middleweight champion and as Robert never said anything against Khamzat, he would rather pass the idea of fighting him.

“I was watching his fight. … I’m a big fan, so I watch all things. I watch how he trains, and all these things. A lot of guys want to fight me, so Robert never said something bad about me,” Chimaev added.

UFC president Dana White stated that Chimaev’s next bout might be at 185 pounds next time he fights. In the post-fight pressure, he also said that he will fight in the middleweight. As for his next fight, Khamzat might get a few fights in the welterweight before moving to 185 pounds.

Khamzat Chimaev has shown his talent and sheer dominance in the octagon while tearing through the welterweight division. He is also one of the most entertaining fighters in the entire organization who comes with so much hype.

However, due to him missing his weight for the main event against Nate Diaz at welterweight, some people are wondering if he will move up a division now. ‘Borz’ has called out the middleweight champion Israel Adesanya many times and hinted at to attempting on becoming a two-division champ.

During the post-fight press conference of UFC 279, Chimaev was asked about his thought on this. He discussed possibly fighting at middleweight next but also stated that he won’t fight the former champion, Robert Whittaker.

Khamzat is not so keen on fighting the former middleweight champ in the 185 division because he thinks he needs some bad guys to fight and thus Whittaker is surely not on Chimaev’s wish list.

“A lot of guys want to fight me, so Robert never said something bad about me. A lot of guys are talking sh*t about me and I can go take their heads off so we will see,” Khamzat concluded.

However, before Khamzat moves up to middleweight, he might get himself in a bout against Colby Covington. But at some point, he will surely move up a weight class and possibly fight for the title against the middleweight champion.