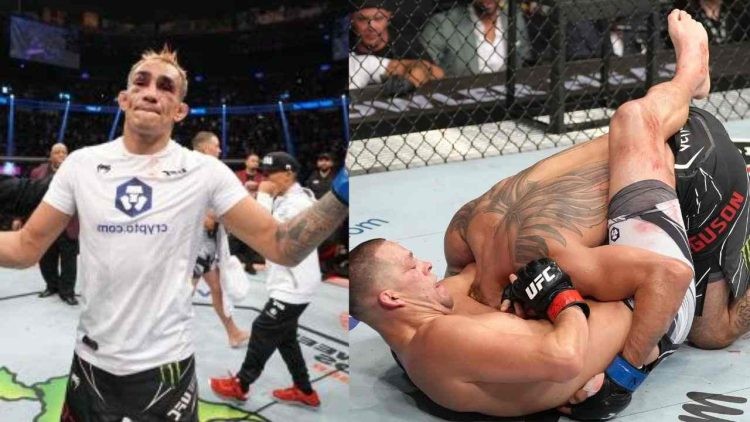 After yet another defeat, Tony Ferguson needs to seriously consider his future in the UFC. Originally meant to fight Li Jingliang in the co-main, the UFC offered a last-minute change of plan. As such, Tony was given the chance to fight in the main event of UFC 279 against Nate Diaz.

For the most part, Tony did well. He kept the fight competitive and fought some close rounds. Not to forget, this was also El Cucuy’s welterweight debut. However, Ferguson began slowing down by Round 4, eventually succumbing to a guillotine choke from Nate.

Fans instantly took to social media to express their concern for Tony. “No disrespect man, but Tony Ferguson needs to pack it up, man. He’s ruining his legacy now…” wrote a user on Instagram. The fight community as a whole finds it difficult to watch Tony lose over and over again. At 38 years old, it’s time he should start thinking about his retirement.

Tony’s loss to Nate is his fifth in a row, and to make matters worse, he seems keen to fight again. “You guys got 4 rounds of f*cking carnage. Last minute replacement, I would’ve liked a little bit more time, but I’m f*cking back man.” From Tony’s behavior and vibe, it does not seem as though he wants to retire any time soon.

Having taken a significant amount of damage in this fight as well, questions need to be asked regarding Ferguson’s health. Prior to this fight, Tony suffered a brutal front kick KO to Michael Chandler and then heavy punishment from the likes of Dariush, Gaethje, and Oliveira.

Tony’s performance against Nate Diaz was far from convincing. Although close at times, Ferguson was largely second best until his submission. To think that Tony could have ended up facing the heavy-handed Li Jingliang instead is a frightening possibility.

If we’re being honest Tony was sluggish, shot-shy, and did not give us anything impressive or to be hopeful about. Years of sustaining heavy amounts of damage have begun taking their toll on El Cucuy. Following the last defeat to Chandler, Tony admittedly considered retiring as well.

Thus, we hope that he gives it a thought again. Tony has had an illustrious career, beating some big names in the sport and having some amazing highlight moments. Hence, his unbeaten 12-fight run and reputation as one of the best Lightweights are already set. Will Tony finally throw in the hat? Only time will tell.