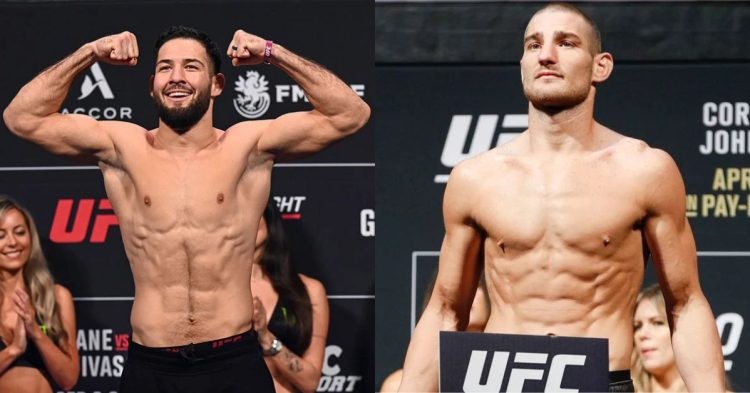 Sean Strickland is one of the most controversial and perhaps entertaining talkers currently in the UFC. He was called up as a last-minute replacement for UFC Vegas 67. Kelvin Gastelum’s unexpected yet gruesome injury forced this change in the opponents for Nassourdine Imavov.

However, being a late replacement hasn’t seemed to deter Strickland. During the media scrum for his fight at the UFC APEX, Sean was his usual, hilarious, trash-talking self. During it, the American middleweight said he was robbed against Cannonier. Strickland called the decision loss a product of racism within the sport.

Strickland also amusingly trolled Imavov for being French. “Let’s just call him [Imavov], the ‘Frenchie’. And if we’ve learned about the French, what are the French best at? Giving up… I know he likes to bang and throws big punches. But, he’s still f***ing French man.” said Strickland about Imavov and his countrymen.

The 31-year-old was taking no prisoners as he took shot after shot at his opponent. Sean said that Imavov may have moved past his own cowardice. However, there was still a “history of cowardice” to be considered in Strickland’s mind. Despite his brutal knockout at the hands of Alex Pereira and a narrow decision loss to Jarod Canonnier, Strickland doesn’t seem like he has lost a lick of confidence.

Sean Strickland vs Nassourdine Imavov will be contested at light heavyweight

Both Sean Strickland and Nassourdine Imavov compete in the UFC’s middleweight division. Strickland is currently ranked #7. He was once ranked as high as #4. But losses to Alex Pereira and Jarod Cannonier caused him to slip down in the rankings. His opponent, Imavov, is a rising prospect who is ranked #12.

Strickland poses a serious step up in competition for Imavov. The Frenchman has not fought another middleweight ranked in the UFC’s top 15. However, another factor may end up putting more pressure on the inexperienced Frenchman.

The UFC announced that the main event for UFC Fight Night: Strickland vs Imavov would be contested at light heavyweight, 205lbs. It comes as a shock considering both fighters are natural middleweights.

This decision has a chance of benefitting the late replacement Sean Strickland as Nassourdine Imavov doesn’t have the best conditioning. And, Strickland may be able to take advantage of this. He will certainly have better cardio on Fight Night, not having to cut weight. If Strickland is smart with his jab and pressures Imavov well, he will be able to walk away from UFC Vegas 67 with the win.