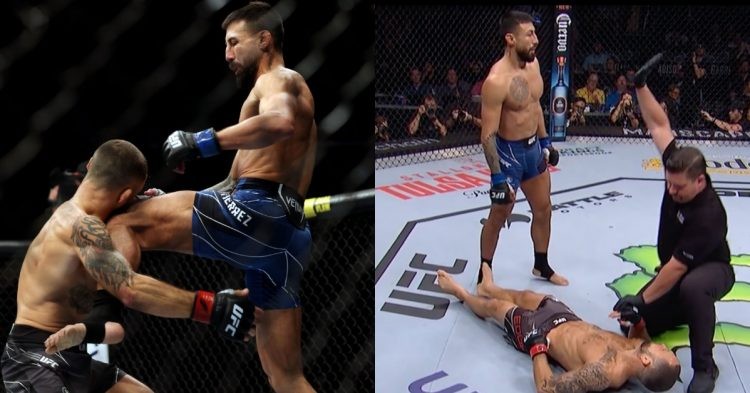 Frankie Edgar started his Mixed Martial Arts career in 2005 against Eric Uresk. Since his debut, Edgar amassed a record of 23-10-1. During his 18-year career, Edgar won the UFC lightweight title and defended the belt three times. He competed in 3 separate weight classes in the UFC and had a Hall of Fame-worthy career. But it came to an end against Chris Gutierrez at UFC 281.

The 41-year-old was significantly diminished in recent years. Since 2019,  Frankie had 5 fights and won only one of them. Out of the 4 losses, 3 came via KO/TKO. Edgar’s last two losses were significantly vicious. Cory Sandhagen beat him with a flying knee within 28 seconds and Marlon Vera put his lights out at UFC 268. Hence, the bad losses forced him to bring an end to his illustrious career.

A legend of the sport makes has his final farewell 🥺@FrankieEdgar hits the Octagon one final time NEXT against @CGutierrezMMA!#UFC281 | Live on ESPN+ PPV: https://t.co/nzONUJu44K pic.twitter.com/0MsMlopIMM

Edgar announced that he would hang up his gloves after a final fight in Madison Square Garden. But Chirs Gutierrez was one of the most exciting fighters in the bantamweight division. He had a UFC record of 6-1-1 heading into the fight and Chris was on a 3-fight win streak. So how did Edgar’s retirement bout go? Let’s find out!

As the recent form would suggest, Frankie Edgar had a mountain to climb against Chris Gutierrez at UFC 281. Chris had 8 KO wins in his career. So Edgar had to be careful going up against such a dangerous fighter. Gutierrez did not rush in despite Edgar’s recent record. He stayed on the outside and landed some nasty leg kicks. One of the kicks even disturbed Frankie’s balance.

He had an intelligent game plan and let Edgar walk him down. Chris was waiting for his chance to land something big and the chance presented itself at the 2:01 minute mark of the first round. As Frankie was trying to land a big strike, Gutierrez dodged the punch and knocked out Edgar with a massive knee. Although it is a shame that Edgar’s elite career ends on such a sad note, it was a great career regardless.

A perfect knee up the middle ends this one early #UFC281 pic.twitter.com/M5A0A1VKYq

Joe Rogan stated after the fight that he was sorry for Edgar’s family who had to sit through such a bad Knockout. He said, “For me it’s like his kids watching it, really hard one.”

Rogan interviewed Frankie after the fight. However, he asked Edgar whether he was okay to do the post-fight interview or not. However, Edgar gave his nod and stated his thoughts on the contest.

Not the way he wanted to end it, but tonight @FrankieEdgar closes the book on a legendary career inside the Octagon 🙌 #UFC281 pic.twitter.com/XDlkQ68mvW

“Yeah, I love this sport man, didn’t wanna go out like. That this sport is a b**ch you know. And I got my family here, that’s all that matters.”

The MMA community also showed their support for the veteran fighter as reactions poured in for Frankie on Twitter.

Legend of this sport @FrankieEdgar #UFC281

Frankie is an absolute legend 💯
Happy for Chris 🤘🏽

What did you think of the result? Let us know in the comments down below.