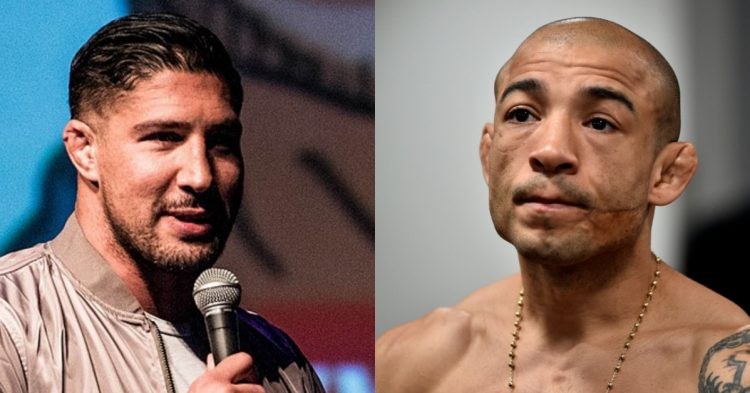 Perhaps the greatest featherweight fighter of all time, Jose Aldo recently retired from fighting. Although he did not make big announcements on social media regarding the matter, reports pretty much confirmed that Aldo has requested his release from the company. UFC respected his wishes and granted him the release. However, Brendan Schaub thinks Aldo deserved better.

Schaub recently spoke on the matter and blamed Aldo’s team for how his career ended. According to the former UFC heavyweight fighter, they should not have let Jose go up against Merab Dvalishvili. At the time when the show was announced, fans definitely thought it was a horrible match-up for Aldo. Brendan pretty much echoed the sentiments and stated his disapproval.

“I think retirement is probably the best move because for him, to get back to you know…He’s a guy who fights for championships. And you know…he had a rough patch from 2019-2020, last three in a row. He lost to Volkanovski…Marlon Moraes and Petr Yan. So, then he goes on this three-fight win streak. He beats Chito, Pedro Munhoz, Rob Font…and his team really f***ed up taking that Merab fight,” (h/t via Bloody Elbow)

Brendan also believes that the UFC would have given him the title shot if Aldo had waited. The comedian thinks Jose deserved to compete for the UFC belt as his retirement fight. The champ Aljamain Sterling will be defending the title against TJ Dillashaw at UFC 280. If TJ had won the fight, he vs Jose Aldo would have been a killer fight.

Jose Aldo decided to call it quits after losing to Merab Dvalishvili. To Brendan’s point, the fight was not a good one for the 36-year-old. Merab flooded Aldo with repeated takedown attempts. Although a prime version of the former 145lbs champ would probably have found a way to put Merab away, the current version of him had no answer for Merab.

Hence the decision to retire was probably right, based on his performance at UFC 278. However, he did have 3 successive wins prior to the UFC 278 fight, where he beat Marlon Vera. So Aldo obviously had some juice left in the tank to go for another title shot if he did not lose to Dvalishvili. Even after the loss, Aldo had the chance to retire in his home country Brazil.

He still had one fight left on his contract when he requested his release. The UFC announced a while ago that they will kick off 2023 with a PPV in Rio, Brazil. So there was an opportunity for The King of Rio to fight infront of his home fans one more time. He had veteran fighters available to him as his potential opponents.

Fighters like Frankie Edgar and Dominick Cruz are currently a part of the bantamweight division. While Aldo has fought Edgar before, the fight against Cruz would have been a great and winnable fight for Jose.

Two former UFC champs going head to head at the fag end of their respective careers would have intrigued the fans as well. However, Aldo is more than happy to walk away from the sport with a fight left on his UFC deal.