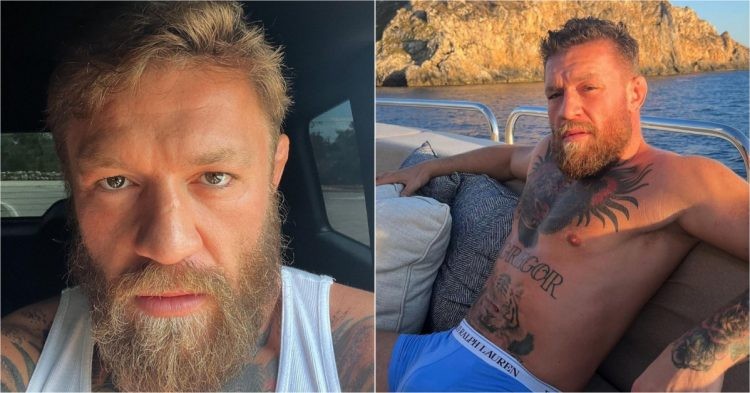 Conor McGregor once again finds himself in a legal battle as an incident from his past comes back to haunt him. In 2022, Conor McGregor was in Spain to spend a big chunk of his recovery time. While he was in the Ibiza area of the country, Conor also celebrated his birthday in a yacht. Conor allegedly assaulted a woman during his b’day bash.

Majorca Daily Bulletin has dropped some bombshell news on the matter. Although the alleged victim refused to be identified, TMZ is reporting that the woman may be from the same area of Dublin where Conor himself hails from. But the report reveals some shocking details of what went down during the incident.

Although there isn’t a sexual assault accusation against Conor on the matter just yet, The Notorious One allegedly assaulted the woman physically. But why did Conor feel the need to allegedly attack the woman? TMZ elaborated on the initial report from Majorca Daily Bulletin. Apparently, the female victim was fearful about her life and was ready to even jump off the boat to save herself from Conor.

The woman apparently made a statement upon her return to Ireland. It has resulted in a court case in Ibiza. Although the 34-year-old himself has not commented on it, Karen Kessler has come out with a statement. Karen, who serves as McGregor’s mouthpiece, claimed his innocence. She said, “Mr. McGregor is steadfast in his denial of all the accusations made by a guest on his boat,”

Fans react to the latest accusations against Conor McGregor

Conor McGregor just can not help but stay in the headlines. Most recently, fans pointed out McGregor’s questionable Twitter activity. However, Conor did not acknowledge it and not much came of it. Prior to that, he was in an ugly public dispute with his former best friend Artem Lobov. Lobov was suing Conor over a dispute regarding the Proper 12 whiskey brand.

Just when it seemed like McGregor was focused on the filming of his debut Hollywood movie, he faces a brand new set of accusations. It has garnered a lot of interesting reactions on the matter. It does not look like McGregor has a lot of support on the issue.

Here are some fan reactions to the issue

How about fighting men instead of woman for a change?

Doesn’t matter. They can show you a video and the UFC wouldn’t do anything about it.

What happened to this guy man https://t.co/VQUn3VFNZn

How many lawsuits/charges is Conor dealing with at any given moment? 10? 20? He has half a dozen crimes caught on tape alone. https://t.co/GhC3rZA3D5

Let's see how the UFC, post-Dana White slapping his wife on New Year's Eve, reacts to this news. https://t.co/B9g94nD5tr

MMA headlines have been awful and it’s only January. https://t.co/zSQ0MsHCvi

‘Physical assault’ has been a big topic of discussion in the MMA world recently. Conor’s boss and the UFC head honcho, Dana White, slapped his wife at a party on new year’s eve. Although there was a huge backlash against Dana, he seemingly came out of it without much punishment. So it will be interesting to see if UFC takes any action against Conor or not.

What is your take on the issue? Let us know in the comments down below.