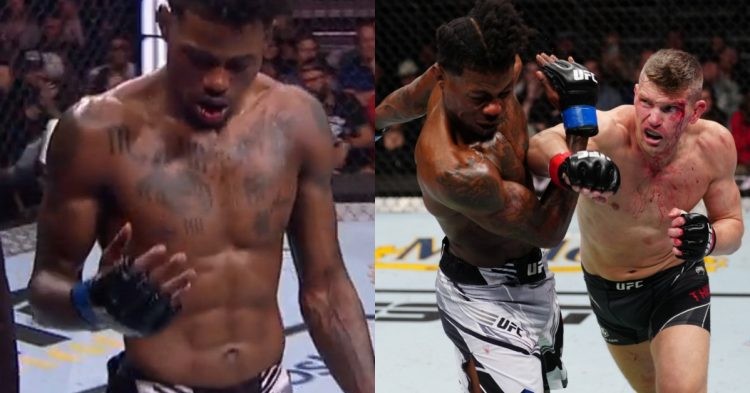 UFC Orlando had a sell-out crowd in the arena and every fan who attended the event witnessed one of the best fights in MMA history. Stephen Thompson headlined the card with Kevin Holland. Fans were excited about the bout because of the striking abilities of both fighters. But, nobody was expecting to witness perhaps the best UFC welterweight bouts in history!

However, Kevin Holland almost put an end to the contest in the very first round. He rocked Wonderboy badly and busted him open early on. But, Wonderboy showed his experience and managed to survive Holland’s onslaught. From there on, Wonderboy just took over the control and put on the performance of a lifetime. He had a great performance in round 2.

Great win for Wonderboy. His kicks are such art. Thankful Holland’s corner called it, no clue what he’s made out of. pic.twitter.com/76AJFNcdtW

But, the third round was perhaps the best round of his career as his kicks just tore Holland apart. From front kicks to spinning heel kicks, Stephen Thompson was in the form of his life! After the conclusion of the 3rd round, Holland’s right hand was clearly compromised and the commentary team pointed it out. Following the bout, Holland confirmed that his hand was hurt from the first round itself!

“I think I hurt (my right hand) in the first round and after that, it was hurting. So yeah, it is what it is,” said Holland. “(Wonderboy was a) little faster than I thought, but definitely what I expected. So hats off to Stephen ‘Wonderboy’ Thompson and his pops and everybody over there in his corner, wonderful team.”

In the post-fight press conference, Stephen Thompson revealed that he broke his as well. He added, “Well, I staggered him a little bit and I could tell. I hit him with a few spinning hook kicks to the head, roundhouse kicks to the head, some left hand and I was like ‘damn, how is this guy still up? I definitely broke my left hand on his nogging as well. He broke his right and I broke my left.”

At the culmination of the 3rd round, Holland seemed to be in excruciating pain. He also communicated to his coaches that Stephen Thompson was much faster inside the Octagon than he anticipated. Although his corner allowed him to continue in the 4th round, Holland did not do much damage and was on the verge of being stopped.

The biggest shot of Round 1 belonged to Kevin Holland 👊 #UFCOrlando pic.twitter.com/xD9LLIIqEZ

But, Holland was extremely tough. Perhaps, a bit too tough for his own good. So Kevin’s corner assessed the condition of his arm and his coach Bob Cook decided to concede the bout. Despite all the punishment he absorbed, Holland stayed in the fight and it never looked like he was about to give up. However, fights like this can have a lasting impact on a fighter’s career.

So the decision to stop the fight was completely justified by Holland’s coaches. Kevin is just 30 and still has a long road ahead of him. So putting him at risk of suffering even more injuries would not have been wise.

However, he temporarily retired following a bad loss against Khamzat Chimaev in his last fight. Will he permanently walk away after this? Only time will tell.