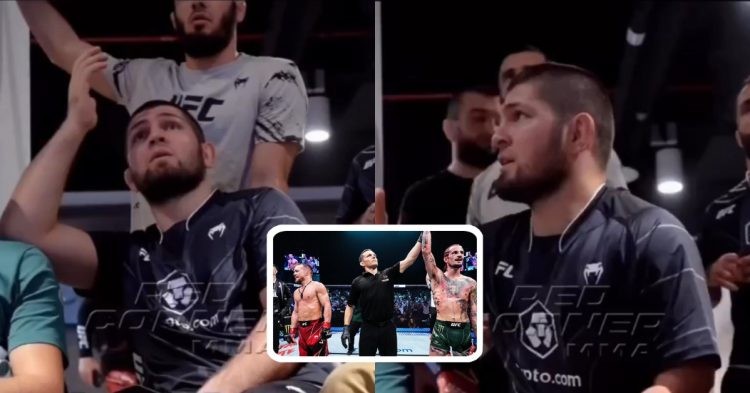 Petr Yan suffered his second consecutive loss at the hands of Sean O’Malley at UFC 280. The fans were extremely excited to see the fight, as they knew both Petr and Sean will give it their all! It certainly was the case as both fighters left a piece of themselves in the Octagon on Saturday night. However, the result was shocking and fans can count Khabib Nurmagomedov as one of the many people who disagreed with it.

Khabib had a big presence during the entire event. He not only cornered Belal Muhammad in the prelims, but The Eagle also guided Islam Makhachev to his maiden championship win against Charles Oliveira at the main event. But he also kept a keen eye on the entire card. In a recently surfaced video, Khabib was seen in disbelief as O’Malley walked away with the split decision win.

“How? How? No. How? How is it possible brother? I swear I gave him (Petr Yan) every round! It was close, but he won every round.”

It was a brutal fight between Petr and Sean, which left its mark on both of their faces afterwards. But the bout was certainly a close one. Both fighters had their individual moments of brilliance. In the second round, they both rocked each other and went for the finish. However, the contest went the full distance and it was upto the judges to decide the winner.

One judge scored the bout in favour of Petr Yan, 29-28. But the rest of the two judges rewarded O’Malley for his activity and had it 28-29 for Sugar Sean. The entire arena erupted in boos as Bruce Buffer read out the result. Even O’Malley himself could not believe that he got the judges’ nod.

During the entire 15 minutes, Sean O’Malley was the more active fighter. As per the stats, Sean attempted a total of 171 strikes in the fight. He landed 91 in total, out of which, 84 were significant strikes. On the flip side, Petr Yan landed 97 strikes in total out of an attempted 139. Out of his total successful strikes, Yan landed only 58 significant ones.

However, the third round had the biggest strike differential, as Sean outpaced Yan by landing 40 significant strikes. In comparison, Petr only landed 16. But, In fairness to Petr Yan, he also landed 6 takedowns in total, compared to O’Malley’s 0 takedowns out of 1 attempt.

Understandably, Yan looked very upset once Bruce Buffer announced the result. The fans did not get to hear his side of the argument post-fight, as he did not give an interview. But No Mercy did break his silence on the loss on his Twitter account, where he slammed the judges to imply that he won. He is not alone, as fans were also furious with the decision.

What did you think of the fight? Were you as shocked as Khabib Nurmagomedov when the result was announced? Let us know in the comments down below.