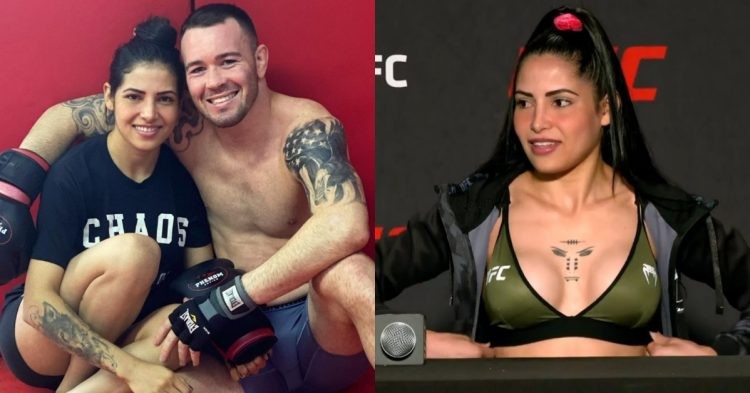 Polyana Viana picked up a win over Jinh Yu Frey in the prelims of UFC Vegas 64. She knocked Yu Frey out in the first round with an explosive performance. However, that is not the only reason why Viana is making headlines. In a tweet, Viana revealed something very personal about her and Colby Covington.

MMA journalist Alex Behunin tweeted out some of Polyana’s favourite things such as food, hobby and TV show. Apparently, her favourite food is pasta and her favourite TV show is Naruto. Although it was a wholesome tweet, Polyana replied with some very personal information regarding her relationship with Colby Covington.

A picture circulated on the internet previously where Viana and Colby sat together in a very intimate fashion. Rumours ran rampant that the two fighters hooked up and Covington even validated the rumours. The former interim welterweight champ told Submission Radio that he worked on his “bedroom cardio” with Polyana. However, Polyana denied Colby’s claims.

Colby wanted me to finger him in the ass, but I did not want to. He got upset!

But, it looks like Colby’s antics hurt Viana deeply and she was waiting to get back at the welterweight contender. She found her opportunity and told the whole world what Covington’s kinks were! However, she did not clarify if the tweet was part of some banter or if the incident really happened.

There are doubts about whether the account is Polyana Viana’s official Twitter handle or not. But, MMA Mania‘s report on the matter, gives it a lot of validation. It prompted netizens to run wild with speculations.

As soon as Polyana Viana sent out the tweet, fans went ballistic on the micro-blogging site. Even fellow strawweight fighter Diana Belbita expressed her amazement about what Viana had to say.

However, the tweet was a double-edged sword. Despite her earlier claims of not having anything to do with Covington, Polyana basically proved Colby right with her latest tweet. She confirmed that there was some sort of relationship between the two and fans rightfully pointed that out.

So Colby did actually smash?

Confirmed that he hit tho regardless

It suddenly all makes sense…. pic.twitter.com/2rU6o6AC6V

But, UFC middleweight Paulo Costa is lauding Colby Covington for his alleged actions. Costa likes to have fun on his social media accounts and he had a lot of interesting comments on the matter.

How many fingers Colby asked ya?

please don’t accuse Colby of being gay, just because polyana said she stuck her finger in his ass. 👉💩

Show me your fingers !

In terms of his fighting career, Colby Covington may have his next opponent set for him. UFC President Dana White is a big fan of a potential fight between him and Khamzat Chimaev. However, there are also talks that Chimarev may fight at middleweight next. So it remains to be seen who Covington fights next. It is certain that Colby will return in 2023. But who will he face? Only time will tell.