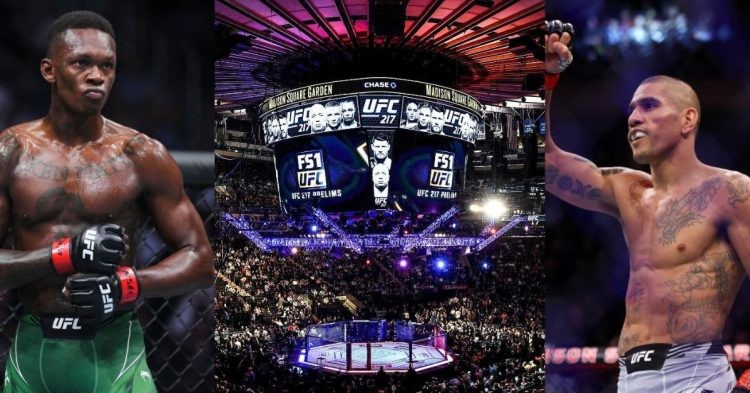 UFC 281 is arguably one of the most awaited UFC PPVs of this year. Stacked with banger fights, Israel Adesanya vs Alex Pereira is set to headline the pay-per-view. Less than a week from now, the UFC will be back in the iconic Madison Square Garden, New York. This Saturday night the middleweight champion will face his former Glory kickboxing rival, Alex Pereira.

Under the bright lights of the Big Apple, #UFC281 is ready to shine 🍎 pic.twitter.com/Db1o4ddhCI

The Last Stylebender will be fighting for his sixth title defense this Saturday against the Brazilian. The fight is considered one of the biggest rivalries. Adesanya has previously lost two times to the kickboxer and the second time being a brutal knockout back in 2017. MMA fans are eagerly waiting for the revenge story to be held on NOV 12.

On December 2017 Adesanya signed a contract with the UFC. After facing Kelvin Gastelum for the interim UFC Middleweight Championship on 13 April 2019, he became the UFC middleweight champion. Since then he has reigned as one of the best-undisputed champions in the middleweight division.

Meanwhile, Alex Pereira made his UFC debut just last year and has made his way to the top of the division with three straight victories to his name. This weekend he will look to dethrone Israel Adesanya to become the new UFC Middleweight Champion of the world.

UFC 281 Date and Time: How to watch Israel Adesanya vs Alex Pereira

The UFC middleweight championship bout will take place at Madison Square Gardens New York, on November 12 at 10 p.m. ET / 3 a.m. GMT. Here is how you can watch it in every country

In the UK the Main Card is on November 13 at 3 am GMT (Sunday). The fight will be aired in the United Kingdom via BT Sport. If you prefer watching all the action on the big screen, just head to BT Sport 2HD in time for the beginning of the event.

We can watch the Main Card via PPV on November 13, at 4 pm NZDT (Sunday) on Sky Arena, Sky Sports Now, Spark Sport, and UFC PPV on UFC Fight Pass.

The Main Card can be watched via PPV on November 13, at 2 pm AEDT / 11 am AWST (Sunday) on Main Event on Foxtel, Main Event on Kayo, Fetch TV, and UFC PPV on UFC FIGHT PASS.