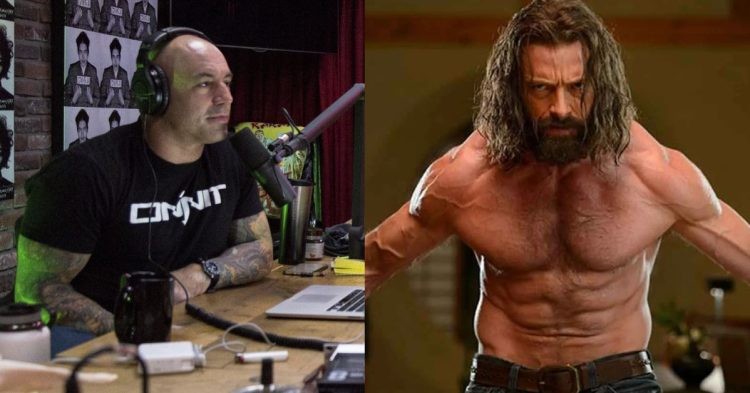 Joe Rogan, longtime UFC commentator and the host of the world’s biggest podcast has been vociferous about the use of PEDs in Hollywood. Rogan himself uses HRT and TRT and has been very open about it. He also revealed the effects of it on his body and workouts. While Joe doesn’t see the problem with the use of such PEDs, he is very much against people lying about being natural when they aren’t.

And, a lot of actors do this. An example Rogan has brought up countless times is Dwayne “The Rock” Johnson. He believes the Hollywood megastar has lied to his fans about being natural. Rogan argues that no one looks that way at 50. Another Hollywood star Rogan accused of being on PEDS is “Logan” and “Deadpool 3” star, Hugh Jackman.

However, Hugh Jackman has now come out to deny these accusations. In an interview with Variety, Jackman revealed whether he was doping to attain the iconic Wolverine physique. “No, I love my job. And I love Wolverine,” said Hugh, denying any PED usage. “I got to be careful what I say here, but I had been told anecdotally what the side effects are of that. And I was like, ‘I don’t love it that much.’ So no, I just did it the old school way.”

The JRE episode with Derek from “More Plates, More Dates” has recently gone viral. This is the same episode where they speculate about which actors are natural and which aren’t. Along with mocking the Rock for seemingly lying about being natural, Rogan also dropped a bombshell regarding the conduct of movie studios.

Derek noted that actors coming clean may have the effect of spurring their fans to use PEDs. It may be why he thinks many lie about their PED use.

However, Joe Rogan proceeded to reveal something he had heard from an actor once. “There was a guy who got really jacked for a superhero role. And he did a friend of mine’s podcast. And he said to him before the podcast, “I’ll talk about anything but do not ask me about drugs.” said Rogan, not dropping any names.

“I think studios and the massive amount of money that’s involved in a film. One thing they don’t want is to jeopardize any of the potential income. If you come out and say ‘The only way I got this way for the Hulk is I had to take massive amounts of steroids’… People are gonna get upset.” explained Rogan. And, this assessment seems quite fair considering how little the general public knows about PEDs. However, the alleged use of PEDs in Hollywood needs to be addressed immediately.