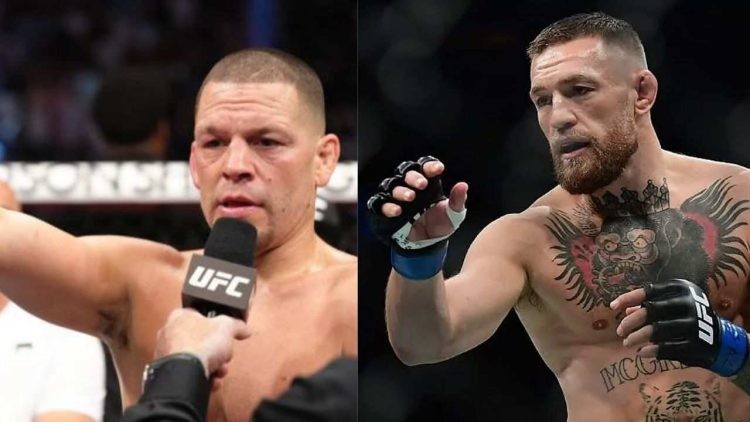 After a chaotic fight week that saw fights breaking out backstage to the press conference getting canceled to a bunch of fighters missing weight. Nate Diaz finally walked out in front of 20,000 UFC fans at the famous T Mobile Arena to fight Tony Ferguson in a five-round main event that eventually put an end to his contractual obligations with the UFC.

Diaz was originally scheduled to fight Khamzat Chimaev which many believed to be a massive mismatch, however, Chimaev missed weight by a huge margin that led to the whole card being reshuffled. Fighting his new opponent Tony Ferguson, Nate put on a show for the fans, securing the guillotine choke at the 209-minute mark of the fourth round. After the fight, Diaz expressed his interest to take over another sport.

Talking to Joe Rogan post-fight, Diaz said “I want to get out of the UFC for a minute and show all these fighters how to take over and own up another sport how you’re supposed to do it because Conor McGregor didn’t know how to do it,” Diaz, who is 1-1 with the Irishman, said. Most probably talking about Conor’s move to switch to boxing to fight Mayweather back in 2017.

Nate Diaz asked if Conor McGregor called him to set up a trilogy. #UFC279 pic.twitter.com/iGWl6DqqtC

Addressing the media after the fight Nate also responded to a reporter asking if McGregor reached out to him personally after he wrote a tweet congratulating him on finishing his contract with the UFC. Nate said, “We supposed to fight dog, I ain’t talking to that motherf*****”.

Diaz vs McGregor III: Will it Happen?

McGregor and Diaz have met on two previous occasions with their first meeting coming in a historic stoppage victory for Diaz in March 2016. The Irishman avenged his defeat later that year which seemingly paved the way for a third bout, but the fight has failed to materialize with both fighters’ careers progressing in different directions.

Diaz has now exhausted his UFC contract and plans to take a break from the organization while McGregor still seems to be recovering from the horrific leg injury he suffered more than a year ago. Diaz though in a recent interview said: “The timing’s not on right now. We’ll worry about that later and for sure it’s gonna happen at some point,”.

McGregor also recently took to Twitter and said “Congrats Nate Diaz on making it to the end of his contractual obligations with the UFC and as a bonafide superstar goer. An incredible feat. Fair play. Our trilogy will happen.”

A Trilogy is certainly on our hands but when, where, and how is a complete mystery. With Nate starting his own Fight Promotion Real Fight Inc. we may see a third fight take place outside of the UFC. Or, we could see these two settle their rivalry inside a boxing ring. Anything can happen but following the verbal agreements from these two, we could very well be assured of a third fight taking place sooner than later.