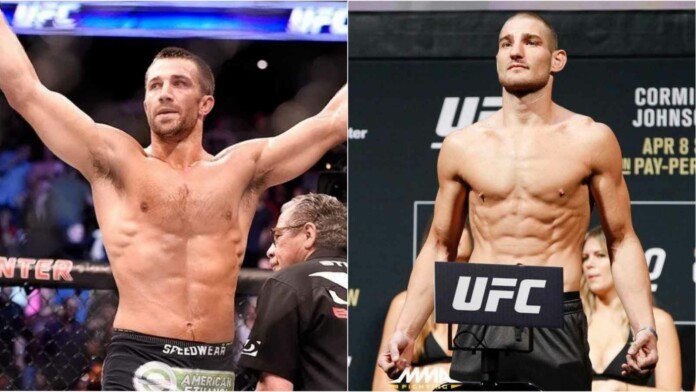 Sean Strickland revealed that he wasn’t surprised as his next opponent withdrew his name. Strickland was all set to go against former champion Luke Rockhold in their bout in UFC 268 on November 6. The PPV  is one of the most anticipated events of the year, features two title bouts. A welterweight championship rematch between Kamaru Usman and Colby Covington and a strawweight title bout between Rose Namajunas and Weili Zhang.

But on Monday, Rockhold announced that he won’t be able to make it to the fight as he suffered a herniated disk.

“ He was never going to make it to the fight lmao “, Strickland shared his hilarious reaction. Strickland then went on to share his experience when he was sparring with Rockhold.

Both the fighters reportedly trained at the RVCA Training Center at Costa Mesa, Calif. Strickland revealed that during their sparring he almost managed to knock Rockhold out and Rockhold didn’t even come for the second round. “Sparred with him once and almost put him out, ” Strickland wrote.

Strickland added with Rockhold’s current form he already knew he was never going to make it to the fight. “He didn’t even spar the second round, walked out of the gym lmao…I knew it wasn’t happening” wrote Strickland. 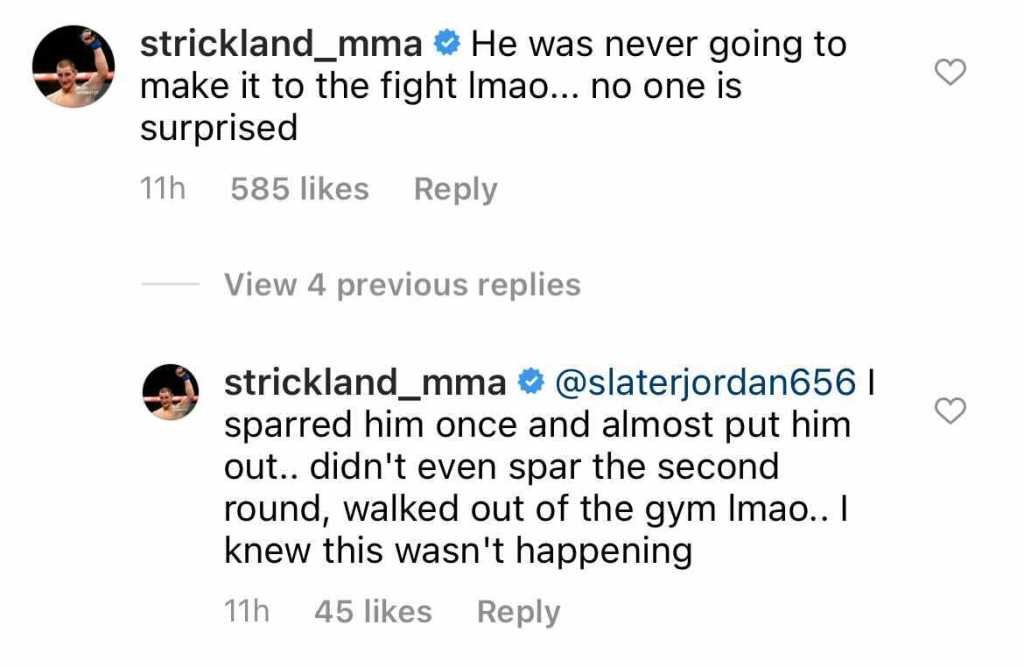 The former middleweight champion, Luke Rockhold has not been in his best for a long time. With several injuries, Rockhold was forced to limit his octagon time in recent years. Since his fight against Michael Bisping in 2016, he has only been part of 3 fights. Skywalker‘s last win came in 2017 against David Branch in UFC Fight Night: Rockhold vs Branch. In his last two Octagon appearances, Rockhold was knocked out twice by Yoel Romero and Jan Blachowicz.

With situations like this Rockhold desperately needed this fight to win to regain his position in the division but due to the back injury, it is now not possible. However, Daniel Cormier, Luke’s former training partner is certain that Luke will come back to fight despite his recent injuries. DC addressed the situation on his show: ESPN MMA’s DC & RC show.

“I think he’ll fight again…And as a person that has dealt with back issues, I know how bad it can be. But I also know that Luke is young and in shape. He’s not over 40 like I was when it happened to me. And I believe that he’ll be able to work himself back into fighting shape. I’m disappointed because I was excited to see him compete again. And I thought this was a favorable matchup for Luke Rockhold. But I do believe that we’ll see him fight again.”

UFC officials are now looking for an opponent for Strickland for the UFC 268 bout but nothing has been confirmed. With consecutive wins over fighters like Brendan Allen, Krzysztof Jotko, and Uriah Hall, Strickland is on a roll and has the opportunity to go for the title shot. But to get to the champion Israel Adesanya, Strickland has to do a lot of work.