“I Am a Little Pissed, Little Down”- Henry Cejudo Admits He Might Never Fight in UFC Again After Dana White’s Decision 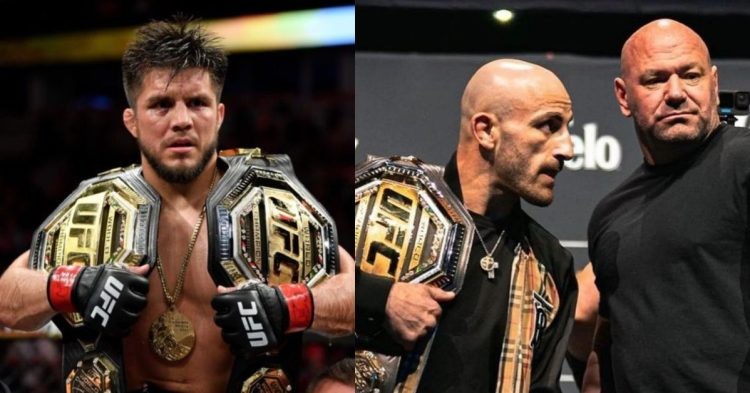 Henry Cejudo has been pining for a shot at featherweight champ, Alexander Volkanovski for a while now. After being out of action for the past two years, a shot against Volkanovski and a chance to make history is the only thing on his mind right now.

However, it appears that UFC President Dana White is not on board with this idea. The head honcho believes that Volkanovski, the #1 P4P in the world right now, will get a title shot against the winner of the Charles Oliveira vs Islam Makhachev bout at UFC 280.

“I’m a little pissed, a little down, but it only gives me one option, maybe I can fight Alexander in Australia,” says Cejudo. “Even if I never fight again, I want you to know from the bottom of my heart that I still respect the crap out of you.” Responding to Dana’s claims that he needs to prove himself again, Henry says, “I won’t fight for anything, other than gold. You know, GSP has had the opportunity, lot of people who have come back and won the belt like Brock Lesnar. I put myself in that category and beyond that.”

Previously, Henry, 33, retired from fighting after defeating Dominick Cruz via TKO at UFC 249 in May, defending his bantamweight title. At the time, he was also the flyweight champion, earning that belt after beating Demetrious Johnson in Aug. 2018 and defending it against T.J. Dillashaw in Jan. 2019.

Now, Cejudo believes that he can make history and become the UFC’s first three-divisional champ. Thus, he has been consistently knocking on the door, wanting an opportunity to fight featherweight champ Volkanovski.

Will Henry Cejudo return to UFC?

According to Cejudo, he has been given options for his return fight. Responding to rumors about a fight against Max Holloway, Triple C that it is the only other fight that he would be open to. He also reveals that he will not fight Yair Rodriguez, as he is on good terms with the Mexican fighter.

So if I had blonde hair and blue eyes or if I was a Canadian with a accent,maybe you would give it to me? I defend both my belts unlike GPS. I left on top and retired on that Monday to give the rest of the division’S a chance. You are plain out scared that I will win.@danawhite pic.twitter.com/nlLyNwi1ne

With Volkanovski occupied with his lightweight title shot, it would seem reasonable for Cejudo to capture his bantamweight title once again. However, Dana White revealed that the winner of Petr Yan vs Sean O’Malley will get the next shot. Whatever the case, Henry will be ready to fight and has already entered USADA’s testing pool.

If Volkanovski fails to capture lightweight gold, a fight with Cejudo could be a possibility. Even so, a potential fight would happen late next year. With Cejudo’s return likely to be delayed, could he potentially take on a warmup fight? If so, who would you like Henry to fight next? Will he eventually get his third-division title? Leave your thoughts in the comments below.