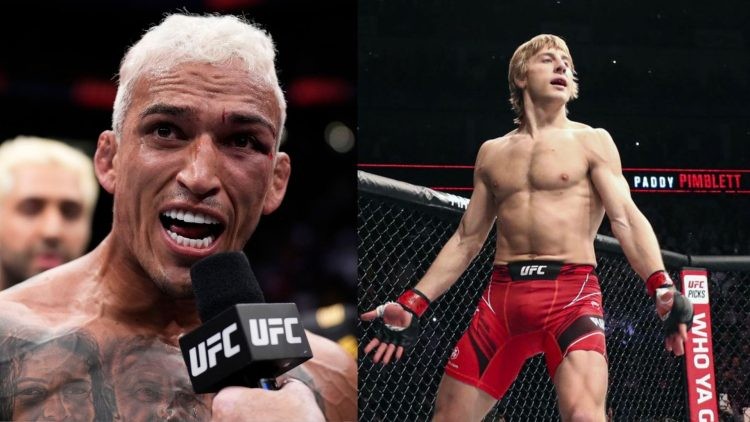 With only 3 fights in UFC, Paddy Pimblett has established himself as one of the biggest stars in the company. His last win over Jordan Leavitt at UFC London was even more impressive than his first two UFC fights.

In the main card of UFC London, Paddy Pimblett faced a little adversities in the first round. However, he submitted Jordan Leavitt in the second round and T-Bagged him as promised.

It’s needless to say that many UFC lightweights will be aiming to fight Paddy Pimblett in the near future. A win over someone like Pimblett can bring a lot of fame. However, it can be asured that Paddy Pimblett is not going to rush through his UFC career and pick a fight with top ranked lightweights after UFC London.

Leading upto the fight against Jordan Leavitt, Paddy Pimblett addressed fans criticising him for fighting unranked UFC lightweights. Pimblette explained that even though he aims for the people’s champion, Charles Oliveira he is not focused on him right now.

In fact, Pimblett has no interest in picking a fight against the likes of Dustin Poirier or Islam Makhachev either.

“It’s funny people comments on stuff, he’s fighting him he should be fighting such and such, I’ve had to UFC fights lad, I shouldn’t be fighting Islam Makhachev and Dustin Poirier and Charles Oliveira like all these idiots seems think I should be. You build your way up first and that’s what I am doing. I’m building my way up.”

Next fight of Paddy Pimblett after UFC London?

The obvious matchup for Pimblett after UFC London has to be against Ilia Topuria. They had an altercation leading upto UFC London back in March, 2022.

Ilia Topuria has called him out on numerous ocassions. However, Paddy Pimblett has not entertained this fight so far. And UFC might hesitate to book two of its rising stars against each other so early in their UFC career.

As always, Paddy Pimblett did not call anyone out after his submission win over Jordan Leavitt. But, he has confirmed that he will fight again in 2022 and the fight will very likely take place in the United States.