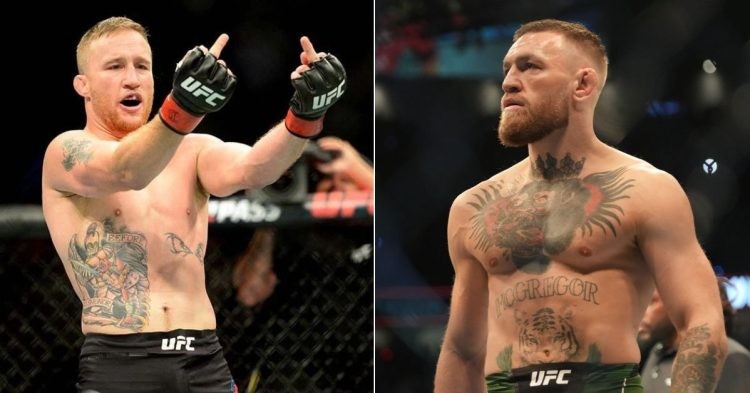 It was revealed from the leaked conversation with Dana White that Conor McGregor wanted to face Justin Gaethje even before he got the opportunity to accept the short-notice fight against Tony Ferguson at UFC 246. After the pandemic brought the whole world to a standstill, Conor McGregor’s return was pushed to a later date considering the live gate. However, as UFC events continue to be despite the pandemic, the lightweight division has grown leaps and bounds with new contenders.

Earlier, Dustin Poirier made his emphatic return to the octagon against Dan Hooker and picked up an impressive unanimous decision victory. On the other side, Justin Gaethje shocked to the world as he handed Ferguson his first loss in over 13 fights, to grab the title opportunity against Khabib Nurmagomedov.

Soon after Gaethje’s impressive win, Conor McGregor called out the interim Champion for a scrap inside the octagon to determine the true challenger for the belt. However, Gaethje declined the offer and maintained that he would fight McGregor after winning over Khabib Nurmagomedov. When McGregor did not get the fights he wanted and failed to land a significant one soon after his return back at UFC 246, the former dual Champion announced his retirement from the sport.

Be that as it may, there’s a reason to believe that the former Champion would be back inside the octagon sooner rather than later. McGregor is still 32, and in is prime. Earlier, Dana White revealed that he has offered both McGregor and Dustin Poirier and is waiting to listen from both the fighters. Meanwhile, McGregor proposed the first-ever MMA exhibition bout with Dustin Poirier, and also released the poster in the anticipation of the same. The hugely anticipated exhibition bout could take place in December in Dublin in association with Poirier’s The Good Fight Foundation, and to raise charity for other non-profit organizations.