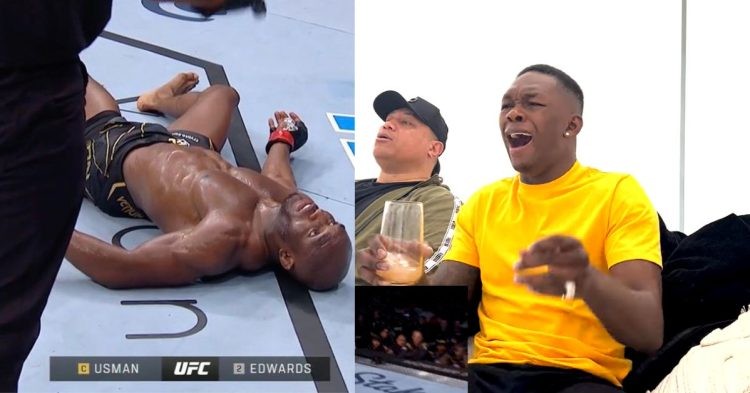 Israel Adesanya reacts to Kamaru Usman getting knocked out

UFC middleweight champion Israel Adesanya left a message for both Leon Edwards and Kamaru Usman after their clash in the main event of UFC 278. After getting dominated by Usman in the late rounds, Edwards managed to pull a head kick to knock out Usman in the final minute of the fight.

‘The Last Stylebender’ shared his reactions on his social media page. Just like everyone, Izzy was also too shocked to comprehend what he had just witnessed. Adesanya is a very close friend of Usman, and that is why he was visibly upset to see Usman getting brutally knocked out.

Israel also gave credits to Edwards for managing to bounce back with an all-time highlight-reel KO that earned him the belt. The middleweight champ was impressed by the Englishman’s performance and stated that his comeback resembled Sylvester Stallone’s Rocky:

The middleweight king went on to give his thoughts on both fighters. He went on Instagram to share a clip of his reaction and wrote:

“What a life…This game can be bittersweet at times. Congratulations to both men!! My Dawg @leonedwardsmma going through adversity and overlooked for years being the dark horse of the division to becoming the new UFC Welterweight Champion!

My brother @usman84kg put on a showcase throughout the fight, overcoming adversity in the first round and coming back in rounds 2,3 & 4 showing what a champion is made of. This is the fight game, but this ain’t a game to us. #dangerous #whatalife #ufc278″.

Watch the full clip below:

‘The Last Stylebender’ shared his reaction on Instagram and stated that this fighting game is a dangerous and unpredictable game for athletes who are competing professionally.

After dethroning Usman as the UFC welterweight, Leon Edwards became the first ever Jamaican-born fighter to become a UFC champion. Edwards is also the second British champion in UFC history, after Michael Bisping.

Sharing the reactions during the main event, Israel Adesanya admitted that he had mixed feelings watching the fight. He was feeling upset to see his close friend Usman getting knocked out cold but also happy for Edwards for his journey through all the hardships. Israel Adesanya and Leon Edwards are close as they share the same manager in Tim Simpson for Paradigm Sports. Izzy stated:

“I’m so happy for Leon and Tim Simpson but then I’m so sad for Kamaru. I know they are going to have a trilogy or something.”

‘The Last Stylebender’ is very close to Kamaru Usman as they share the same African heritage and also with the heavyweight champion Francis Ngannou. As the only champions of African origin, they are very close and often address each other as brothers.

Usman was taken to hospital after the fight and it is safe to presume that he has to wait until he recovers before he can face Edwards for the third time.

Israel Adesanya concluded that we might see Leon Edwards vs. Kamaru Usman 3 at some point in the future. UFC President Dana White also stated after the fight, that this potential trilogy has an absolute possibility.